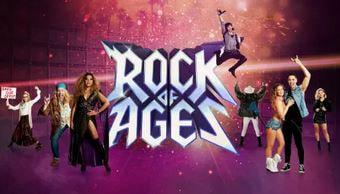 Rock of Ages is at the Playhouse Theatre Edinburgh this week (Tue 10 to Sat 14 May) and if you have a liking for, or are old enough to remember, some of the “glam metal” bands of the 1980s then this “jukebox” musical comedy is maybe one for you, if for nothing more than to hear and see a few of your favourite musical memories performed live on stage and maybe re-live a few magical musical moments from your youth.

Many of the bands/performers who have their music featured in this show are still well known to many people – Styx, Journey, Bon Jovi, Pat Benetar, Steve Perry, and Europe to name just a few.  Other bands like Poison and Twisted Sister might not have survived the passage of time so well in  the memories of some people.  Oddly, despite the name of this show, the Def Leppard song of the same name is not included here; perhaps permission for use could not be obtained, for whatever reason?  The other oddity, well for many British audiences, is “Cum on Feel The Noize” as if you are old enough this classic Slade song will always identify you with the 1970s (1973). American audiences are probably more familiar though with the Quiet Riot cover version used in this show.

As with all of these “jukebox” musicals, there is a story underneath all of the music (even if it can sometimes be a thin one). The problems that all of these shows have, however, are always two-fold (at least). One, that the songs are never intended for this use and often shoe-horned into scenes with varying degrees of success, but here they work pretty well within the story line. Two, that the cast is generally chosen for their ability to perform the musical numbers, and not for any dramatic ability to perform the story dramatic underneath the music. To be honest, here neither of these issues really matter as this show is what it is, a nostalgic walk down the memory lanes of youth for many members of the audience tonight, and maybe an introduction to some great songs for those in the audience who are a lot younger and maybe finding some of these songs for the first time. This is simply a feel good show, a switch off from any troubles you might have outside of the theatre and just enjoy the evening.  From the audience reaction during the show and coming out after it, this is exactly the experience that many people had this evening.

Without giving too much of this story a away, the plot is fairly simple, the favourite club of many people for their music and social life, The Bourbon Room, is under threat from property developers Hertz and Franz Klineman (Vas Constanti and Andrew Carthy) who also want to rid the town of the evils of rock’n’roll  We of course have the boy with big dreams Drew (Sam Turrell) meets ever so sweet girl small-town girl Sherrie (Gabriella Williams)  love story, an almost obligatory love triangle, plus stories of broken hearts and broken dreams. Filling out our main cast list are bar owner Dennis Dupree (Kevin Kennedy), and an obviously “Spinal Tap” inspired “rock god” Stacee Jaxx (Matt Terry). Everyone listed here does a good job tonight with the songs and the show, but for me a little extra credit goes to Gabriella Williams as Sherrie, and also to Phoebe Samuel-Gray who took over the role of dance club owner Justice. Vicki Manser as the city hall rock’n’roll defender Regina also deserves credit for her role too.

This show of course will always rise or fall on the skills and personality of its narrator Lonny, and here Joe Gash was on fine form throughout, always keeping a light comedy tone that gives this show its connectivity between audience and stage performers.
Rock of Ages is what it is, a reflection of the 1980s, and some of that might not fit in with some people’s PC ideology today, but this, for good or bad, is how things were and to try and remove this and update it with our times would probably destroy the authenticity of this show.  For me, this was how I remember those times, and this is the music that I so fondly remember listening to at this point in time in my life.