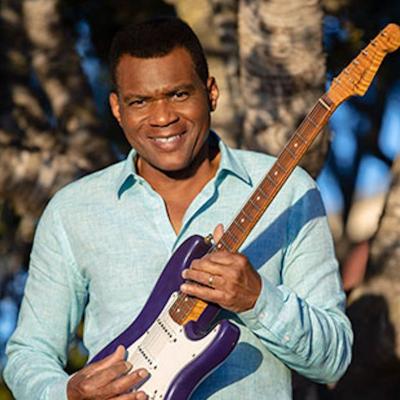 Robert Cray and his band were back in Scotland at The Queen’s Hall Edinburgh tonight, stopping off to play as part of their tour to promote Robert’s latest album “That’s What I Heard”. This album, released back in 2020, features covers of songs that are close to Robert Cray’s heart as well as four new ones written by him.  This evening’s performance was booked in for 2021 but had to be re-scheduled due to Robert’s and pretty much everyone’s tour plans coming to a halt due to events outside their control.

Robert Cray has been enriching the world with his own exceptional guitar playing and songwriting skills for over 40 years now, so it will come as no surprise that some classic Robert Cray songs were in this set-list that included, “I Shiver”, “Phone Booth”, and of course, “Right Next Door (Because of Me)”.

Watching and listening to the Robert Cray band perform live is always a pleasure as Dover Weinberg (keyboards and Hammond organ), Richard Cousins (bass guitar), Les Falconer (drums) and of course Robert are as musically tight whilst free and expressive as any band is probably ever going to be. Watching Robert, Richard and Dover is at times just like watching three old friends jamming away together for fun, but of course this masks some wonderful and very precise musicianship from all, with each knowing just where the other is on stage almost instinctively. Robert Cray’s guitar skills are admired worldwide, and it is always a mystery to see and hear just how laid back and effortless Richard Cousins can make his highly skillful sounds appear to be.

Even after all of these years, you never know just what to expect from Robert Cray as he has the musical ability to move in any direction possible; slow classic blues to upbeat funk, and everything in between, this man can play it all, and a new song “Hot” from the new album is simply a classic dance-floor filler.

Being able to play music well is obviously a big part of any professional musician’s job, but there is of course far more to performing on stage than just that if you are to have the career longevity that Robert Cray has had.  There has to be something extra special for so many people to take you and your music into their hearts, and for me a big part of this is Robert Cray’s gentle ease of talking to and communicating with people in a laid back and very friendly style, and this ability was, as well as his music, evident all through tonight’s show.

Opening this show (and others on this UK part of the tour) were Welsh duo (from Cardiff) Zervas and Pepper (aka Paul Zervas and Kathryn Pepper) with Charlie Piercy adding some very nice electric guitar work too.

As with all support bands, time is short to showcase their work, but there are some very interesting songs from this duo that were played tonight including “Living In A Small Town”, “Lookout Mountain” and “Sure Fire Bet”.  It is obvious from their music just how much the influence of those legendary songs from the “Laurel Canyon” and songwriters such as Crosby, Stills and Nash, Joni Mitchell, and James Taylor have influenced their songwriting and musical directions, and I mean that in a positive way.