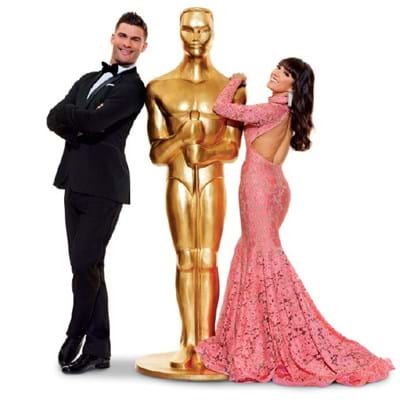 Remembering The Oscars was at The Festival Theatre Edinburgh tonight for one performance only on this re-scheduled from 2019 tour, and I think it is fair to say that this was one show for the many fans of televisions “Strictly Come Dancing” and of course the stars of this evenings show Aljaz (Skorjanec) and Janette (Manrara).

I have to admit that I have never seen an episode of “Strictly” and that Aljaz and Janette are not familiar personalities to me, but I was intrigued enough by the concept of this show and to judge it on its musical stage show merits alone. The idea here of Aljaz and Janette paying their own homage to some of the great music and dance routines of their favourite Hollywood films (both live acting and animated) produced an interesting mix that obviously meant that some of their “interpretations” worked better than others.

With such a rich background of musical history to draw upon, the evening produced their homages to many films old and new, including Mary Poppins, La La Land, Singin’ in The Rain, Fantasia, Slumdog Millionaire, Schindler’s List, Titanic, An American in Paris, and many more.  This was a non-stop show designed to obviously highlight the dance talents of our two stars (it is their show after all) and interspaced between some vocal only moments (to give them time to change into their next costumes and sets) there were some genuinely interesting “re-makes” of some classic musical moments and new interpretations of some music from the films. Two moments that will stay with me for a long time are, however, the show’s 10 minute homage to the music of Queen and a recreation of a ballet scene from “Black Swan”. Sadly, neither of these moments will be remembered in a good way for me.

I have to be fair to this show, it was created to a very targeted audience, the fans of Aljaz and Janette, and many of the people in the audience tonight had probably originally booked this show in 2019 and waited until now for it to come to the stage. That fan dedication and loyalty is something that our show stars have obviously earned and “the faithful” were loving every minute of this production.

I have genuine mixed feelings about this show and there are many positives to it. Firstly, this show is not being produced without a sizeable budget, as to take a team of dancers and performers with many costume changes, plus large screen on-stage visuals (created specially for this show and often starring our two hosts) and all of the technical and background staff it takes to support this on tour is always going to be expensive, and to do all of this for one night only as part of a touring schedule is something to be praised. There are some negatives too, and the most obvious one for me was something that should have been so easy to fix.  With all this technology at hand, why did the on screen visuals never match up to the film/personality/music nominations that Aljaz and Janette were announcing to the audience?

Today being Mothers Day, this show was obviously a special treat out for many families and the theatre was full. Even on a normal evening, if you are a fan of Strictly Come Dancing and of Aljaz and Janette then I think it fair to say that you will love this show if it is playing anywhere near you on this schedule as they obviously know exactly what their audience and fans want and give it to them in a light hearted non-stop dancing and smiling production.
One big plus throughout the whole night though was discovering the impressive vocal talents of singer Janine Johnson who, for me, stole the show every time she sang.