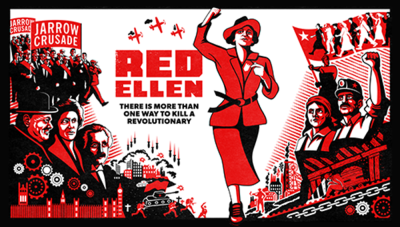 Red Ellen is at The Lyceum Theatre Edinburgh from 04 to 21 May, and if you have any interest in the formative years of the Labour party movement and obviously one major figure in particular, Ellen Wilkinson (born 1891-died 1947) aka Red Ellen then this work by Caroline Bird is probably for you.

Any work for theatre like this one that is based on the life on any historical figure and real life events is always going to run into unavoidable problems, the biggest of them being here that a hugely active political period of nearly 20 years has to be compressed somehow into roughly 3 hours performance time (including an interval), and that by default means that some hugely important issues have to at best be skimmed over in “limited depth”, but they have to be there.  This in turn reduces the time available for any writer to get underneath the “historical skin” of people and somehow reveal a little of their inner emotions, and it takes well into Act ll for this to happen here, but the wait is worth it in the end.

There are of course always along the road to telling a story like this one many compromises to be made and in the end, this is a work for theatre and not a historical re-inaction of events. Yes, there are real issues, real facts to be dealt with here, but the British/European political landscape of this period is complex and often interwoven with many other issues, and some of the real truths of this time are now only widely known when viewed with the benefit of time and hindsight. To truly understand Red Ellen and her world, particularly her being a founding member of the Communist Party of Great Britain, we have to try and view her wold through her eyes at the time if we are ever to grasp her, and many other people’s idealism and understand that they were often unaware, or blind to how those beliefs were at times manipulated by people with far different agendas. Overall here, Caroline Bird has dealt with this subject matter well and what could so easily have become a dull and boring political lecture is in fact a very entertaining and informative work of theatre.

In Britain, we seem to have a liking for doomed causes, we romanticise them into myths and sometimes that myth takes on a whole life of its own, often many years after the event, and one such event is the “Jarrow Cruisade” of 1936. Here Ellen was right in her convictions, her, heart, her beliefs, but at the same time she had to know that politically and practically that this march was going to have very little impact (if any) and actually caused the marchers almost immediate hardship as many were unemployed and lost their right to dole payments as they were deemed to no longer be available for or seeking work during the period of the march.

This story in the end is, despite other cast members, pretty much a one person show as it is Bettrys Jones as Ellen who is always on stage and is the true “performance force” on-stage. This is after all Ellen’s story and Bettrys is simply outstanding in this role as she brings to life a woman full of passion and determination, a woman with an equal love for woman’s right, politics. This passion and unstoppable drive is also there in her personal life and all too often ill-fated love affairs. Red Ellen as a work of theatre is Bettrys Jones on stage and it is hard to imagine anyone else in this part now.

There are a lot of people portrayed on stage here and to do this many cast members take on many parts and at times this works, at other times we get very superficial cartoon stereotypes with portrayal of Albert Einstein and Ernest Hemingway being top of this list for me. There is simply little room left here to do otherwise though as the depth portrayal of Ellen leaves little time to develop other people in any depth. That problem does sort itself out a little in Act ll in the scnes between Ellen and David (performed so well by Jim Kitson). There are also many moment where Helen Katambra as Ellen’s sister Annie promises to deliver much, but time always seems to get in the way and cut her efforts short here.

When you are running at a fast pace over major historical events such as The Spanish Civil War, Stalin’s Russia, The “Jarrow Cruisade” and of course so much that we now take for granted that came from that very first post WWll labour government, including of course the NHS, then passing nods to history and events are all that are possible at times in a work like this.  What does come through though is the simple fact that Ellen Wilkinson truly believed that it was possible to make the world a better place and that spirit, that belief in a better tomorrow is captured so well here by Bettrys Jones and her Ellen.

Ellen was to learn very quickly that, like life itself, politics is so often an arena where ideologies and best intentions often have to be compromised to obtain your intended goals, or in some cases fit the current situation. That is well represented here by Ellen having to deal with her conflicting beliefs as a pacifist and her support at the same time of military aid to help fight fascism in the Spanish Civil War. Although written prior to current world events, many of us now face this same conflict of interests and beliefs dilemma with events in Ukraine.

The fact that after her death (declared to be an accidental overdose of medicine for long term bronchial issues) all of Ellen’s personal papers were burnt means that there will always be unwanted gaps in this story. In the end though, does this matter as the life that Ellen Wilkinson lived was, despite an all to early death a truly remarkable one and deserves its place  forever alongside the enduring stories of the “Jarrow Cruisade”