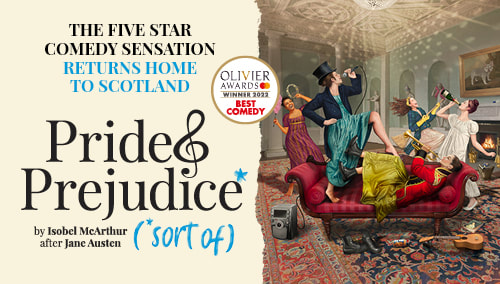 Pride and Prejudice (*sort of) is at The Lyceum Theatre Edinburgh from 18th October to 5th November and if you are a fan of Jane Austen’s most iconic love story then you will either love this show, or wonder just what is happening to one of your favourite books; I don’t think there will be any middle ground here.
This is really a homecoming to Scotland (and its involvement with the Lyceum Theatre) for this show and since its original Scottish opening in 2018 Pride and Prejudice (*sort of) has been a West End theatre hit and won the Olivier Award for Best Comedy.

To be honest, I am not sure why I like this show so much as I am not usually a fan of Jane Austen novel adaptations and I usually don’t review much comedy theatre, but when I first saw this show some years ago, the sheer imagination of writer and director Isobel McArthur took me by surprise and this time I was still discovering many lines of subtle (and unsubtle) humour, satire and visual jokes that I had missed first time round.

It is pretty much impossible to actually describe the anarchy, well almost insanity, of this work as Isobel McArthur collides the world of Jane Austen into a greatly expanded Monty Python sketch. This show probably should not work at all, but somehow the creative originality of taking a classic book, keeping the essence of it, then reimagining everything else works brilliantly and audiences are simply loving the end result of non-stop humour and visual gags.

Without giving any of the show away, Pride and Predudice (*sort of) is written for five or six women (five tonight) who play all the parts – the servants, the Bennet girls plus their mother, Mr Darcy, Mr Bingley and other main male and female roles.  Here time periods clash together as the world of this 1813 novel meet our present day, and the cast often break into karaoke songs that we all know and somehow can imagine Jane Austen using herself (if she had heard them on her radio of course).

Bringing all of this creative and somehow organised anarchy to life on stage tonight were Tori Burgess, Christina Gordon, Leah Jamieson, Hannah Jarrett-Scott and Isobel McArthur and you can tell they are having as much fun on stage with this show as we in the audience are having watching them perform it.

This show deserves all the success it has had, as it is not often that such a bold and original work gets to the stage, and even if you like your Jane Austen girls as they should be written, Isobel McArthur has given us here a modern take on them and their family which for many people is probably more identifiable than their original world of early 1800s. Perhaps more importantly, this is all done while not only keeping Jane Austen’s original commentary on a woman’s lot of the time, but also defining it more in many places to a razor sharp comedy edge.