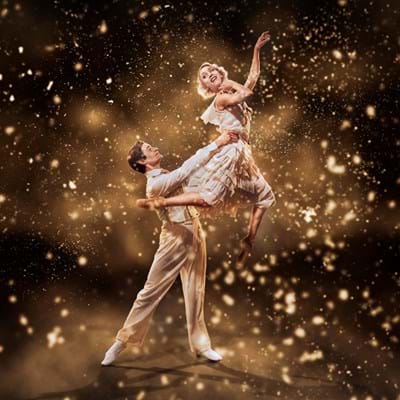 Northern Ballet’s The Great Gatsby is at The Festival Theatre from Thu 21 to Sat 23 April, and the only problem is that three days is far too short a run for this wonderful interpretation of F. Scott Fitzgerald’s classic 1925 novel about true love and living the “American Dream”.

There is, now looking back through the years, this all too often quoted misconception that F. Scott Fitzgerald set his novel in “The Jazz Age”, and although this is to some extent correct, it is more accurate to state that the author set this novel (as he did with others) in the contemporary and very real world that he was living in. This just happened to be “The Jazz Age”.  Perhaps the fact that “The Great Gatsby” was not initially a success and it took until the 1950s for this work to get the re-evaluation that it deserved has something to do with this “nostalgic” view of the novel.

Whatever the reasons for how we now view “The Great Gatsby”, it is now considered by many people to be a literary masterpiece, and somehow bringing a complex work like this not only to the stage, but adapting it for a ballet, was always going to be a huge challenge across many disciplines.  With their interpretation combining the creative skills of choreography, costume, set, sound and lighting design, music and arrangements, many other talented staff, and of course the hugely talented dancers, Northern Ballet have created with their “Great Gatsby” their own modern masterpiece.

A huge part of the initial creative force behind this production is of course David Nixon who is responsible for choreography, direction, scenario and costume design. In all of these areas, the work is simply stunning and a visual treat to watch. The attention to detail in not only the so often inspired choreography but the costumes makes this “Great Gatsby” feel at times that as someone in the audience you are looking at the “Jazz Age” through a window in time, and that window is the theatre stage. Everywhere there is simply style.

This is a complex story to bring to the stage and over two acts there are 16 set pieces and how all of this was going to be brought to the stage was a puzzle to me from the start, as this obviously was going to exclude any large and fixed set changes.  Even then, getting all of this to move seamlessly with the narrative was going to be a huge undertaking. It is here, in set design, that Jerome Kaplan has excelled, and his use of a blank canvas with drop down set pieces which often reminded me of scenes from Edward Hopper paintings works both seamlessly and perfectly for each required scene. The addition of creative lighting (Tim Mitchell) adds much atmosphere to these changing sets too.

There are many themes running through “The Great Gatsby” both as a book and here in this Northen Ballet production, but perhaps the greatest theme is Jay Gatsby refusing to give up on finding again the lost love of his earlier, and financially far poorer days, the woman, the love he has never forgotten, the woman he will risk anything for to hold in his arms once more – Daisy Buchanan.

It is this love story and the conflicting passions of everyone involved that make  “The Great Gatsby” such a wonderful source of material for a ballet, and everyone on stage tonight was as “team Northern Ballet” responsible for simply bringing dance and theatrical magic to the Festival Theatre stage.

There of course always have to be principal and leading dancers and for this performance of The Great Gatsby, Jay Gatsby (Joseph Taylor) and Daisy Buchanan (Abigail Prudames) not only made the difficult look effortless, graceful and always stylish, but more importantly they made you believe that there was a real love story between them.

The emotions and passions of this story have given David Nixon a wide landscape of expression to translate into dance and there is also when required a sensual and very stylish erotic feeling to some portrayals, both male and female. For me, there is also at times, particularly with the male dancers, that style of dance expression that Gene Kelly made so classic in his wonderful films, and that is important here and visually, this production is very cinematographic. This story is also of course about the main characters around Gatsby and Daisy and breathing real life into them via the language of dance were Nick Carraway (Sean Bates), Myrtle Wilson (Minju Kang), George Wilson (Riku Ito) Jordan Baker (Heather Lehan) and Tom Buchanan (Lorenzo Trossello).

I also have to ask myself how many choreographers can make a dancer look good with an automobile tire (deliberately American here) as a dance partner, as Riku Ito does in his performance as garage mechanic George Wilson.

Bridging the gap between the years of “The Jazz Age” and the past, we also have the young soldier, later to become Gatsby (Harris Beattie) and his young sweetheart Daisy (Rachael Gillespie).

Music and dance were of course two of the defining elements of “The Jazz Age” and at times the wonderful choreography of this production gives a unique blending of dance styles – classical ballet meeting The Charleston being one inspired example of many.  Dance needs music and that for the most part comes from the extensive musical catalogue of Rodney Richard Bennett. In adapting this work for the orchestrations required for this ballet, John Longstaff and Gavin Sutherland must be given their rightful credits too.

The original F. Scott Fitzgerald novel “The Great Gatsby” may not have been an initial success, but Northern Ballet’s “The Great Gatsby” is an immediate success and a ballet classic will now take its place alongside a literary classic.