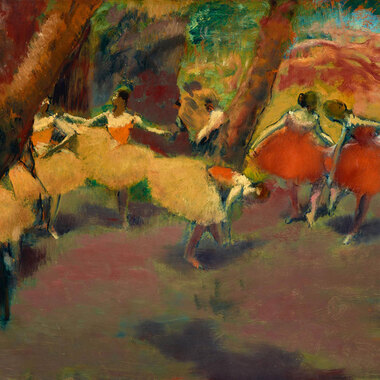 A Taste for Impressionism - Modern French Art from Millet to Matisse is National Galleries of Scotland’s 2022 Summer Exhibition at the Royal Scottish Academy, and this is a chance to see in one place many of the world’s most famous works of art by impressionist (and post-impressionist) painters that have found their way into Scotland’s national collection.  Here are “art friends” both old and new with more than a few surprises along the way.

This is a large, well curated and informative exhibition that gives us via a selection of paintings on display an insight into some of the artists who were already, prior to the impressionists, painting their own distinctive depictions of the landscape and the people (often rural) around them. We can see from these works how they influenced the creation of the later impressionist and post-impressionist movements and many works that we are all now so familiar with.

Here in this exhibition are many iconic paintings, Vision of The Sermon (Paul Gauguin), Before The Performance (Edgar Degas). Haystacks, and Poplars on the Epte (Claude Monet) and Olive Trees (Vincent Van Gogh) to name only a few of them.  Also given their rightful space in this exhibition are bronzes by Edgar Degas, Matisse Jazz prints, plus etchings and other media from artists that for some reason we do not always recognise as having worked in those media. The renewed interest of the time in etchings is, for me, (as it was to many of the artists themselves) a link to the past as many earlier classical European artists also explored this form.

What makes this exhibition perhaps unique is that it brings out from behind the shadows some of the important collectors of art of the 20th century who, by their generosity to the gallery, made it possible for Scotland to have what is now one of the most important collections of impressionist art in the world. This is a far cry from the opening years of the 20th century when the gallery held no impressionist works in their collection.

Wealth and stunning private art collections have often gone hand in hand, with one clearly needing the other to finance and obtain important works, and even in the early decades of the 20th century, prices for works by Monet, Van Gogh, Degas and many other now household names were rapidly increasing in price and taking them out of the reach of many national collections that often had very limited funds available to spend on new acquisitions for their galleries. Fortunately for all of us in the end, there were small groups of people with not only the wealth, but the insight, to purchase many of these works at what now seem to us to be insanely low prices (but at the time were often still substantial financial investments in art comparative sometimes to buying even a good house at the time). Many of these collectors were also keen to recognise the potential of a new and upcoming generation of artists.

Interestingly, many of these “new collectors” were looking to create personal art collections that were very different from what their contemporary aristocratic collectors were buying and here, instead of looking to the old European masters, they were creating collections which at the time often challenged what was acceptable in art. Many of these collectors were women, and for perhaps the first time, less masculine dominated imagery allowed an often very feminine perspective to be represented in their collections.

Perhaps now we have the best of both worlds here as the original collectors – Elizabeth Workman, Sir Alexander and Rosalind Maitland, and others - were able to enjoy their art during their lifetime and we now get to enjoy them too.
One of the unexpected highlights of this exhibition is to be able to see the x-ray image of the until now unknown self-portrait of Van Gogh hidden for over 100 years on the reverse of his far darker Dutch-style period painting “Head of a Peasant Woman” and only discovered when this painting was itself under examination.

Van Gogh had possibly run out of money for a new canvas here (as he sometimes did) but oddly to our modern viewpoint, this self-portrait was deemed to be far less interesting than the painting on the other side at the time in commercial terms to art dealers, galleries and potential buyers – and covered up with cardboard which was then glued onto it.  How much of this self portrait it will be possible to recover with careful conservation in the coming years, only time will tell.