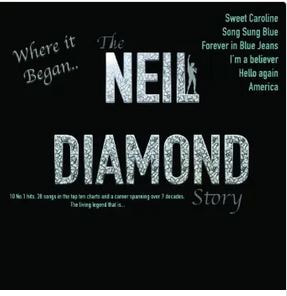 Elsa Jean McTaggart Neil Diamond: The Story Where It Began at theSpace @ Surgeons’ Hall (Fleming Theatre) is a new show for this year’s Edinburgh Festival Fringe and if you just want to forget anything else in the world for roughly an hour and have a good old sing-a-long to some of your favourite Neil Diamond songs then this could be just the show for you.

Normally any Fringe show featuring the unique vocal (and fiddle) talents of Elsa Jean McTaggart has Gary Lister in support on keyboards but, for this show, Gary is both featured vocalist, keyboard player and story teller with Elsa providing back up on guitar and fiddle. Being centre stage show runner is obviously something that Gary is getting used to on the Fringe stage, but this is not really something that new as both have been presenting shows like this elsewhere for many years and their weekly lockdown youtube party broadcasts (in a similar vein to this show) were a big online success with many people.

In Gary’s own words, this show is a “work in progress” and many Fringe shows are like this, testing what their audiences want, and adjusting as needed as the shows go along.  What this one does have though is more than a few instantly recognisable songs by Neil Diamond that, judging from the audience today many, people have taken into their hearts over the years.  There are some classic songs here including “Cracklin’ Rosie”, “Song Sung Blue”, “Forever in Blue Jeans” and of course “Sweet Caroline”

What this show needs though is duets and I know from many previous Fringe shows what a unique vocal talent Elsa Jean McTaggart is, so the chance to utilise that talent on the duet “You Don’t Bring Me Flowers” was for me an oversight.  There are also many songs in this show that are perfect for re-arrangement as duets and that emotional inter-play that Gary and Elsa are capable of on-stage, and when singing together is just perfect for duets.  Some songs of course need a single male vocal on them, but the two combined would for me allow aspects of the lyrics in some of these songs to be explored much further. I have to admit to not being a huge Neil Diamond fan, but I do recognise the quality of the songs that he wrote and a very unique vocal talent, and these songs have the potential to offer so many possibilities of new interpretations and new arrangements of them.

At the end of the day, this show is exactly what I said earlier, forget any troubles that you may have in the world and just have fun for a while.
Elsa and Gary are performing a wide range of shows this Fringe, and if you like the songs of Eva Casssidy then Elsa’s show featuring her on lead vocals singing the songs of Eva Cassidy is one not to miss as this is one unique singer/vocal talent paying tribute to another unique vocal talent.