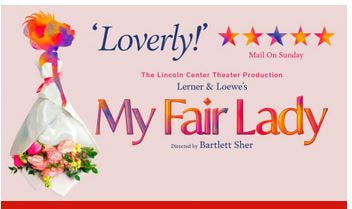 Originally performed as a stage musical in 1956 and of course the now classic 1964 film (starring Audrey Hepburn and Rex Harrison), “My Fair Lady”, (which was based on George Bernard Shaw’s 1913 stage production of “Pygmalion”) has, courtesy of Frederick Loewe’s wonderful score and Alan Jay Lerner’s book and lyrics, some of the most instantly identifiable songs of any stage musical.

There is something about our never ending fascination with Victorian/Edwardian times and their rigid class structure that never seems to go away and so many of the songs in “My Fair Lady” seem to capture all of this perfectly. "Why Can't the English?", "Wouldn't It Be Loverly”, "With a Little Bit of Luck", "Get Me to the Church on Time", “I Could Have Danced All Night", and other songs in this production seem to have assimilated themselves into our collective minds as if they were really written in the period in which they are set.

This world of Edwardian London that Eliza Doolittle and Henry Higgins live in is of course a sugar-coated fantasy land as for the most part we do not want to face the hard facts of what life was really like for poor people of the day. For “My Fair Lady” this is a perfect setting though as this show is set in a world of sheer fantasy where elements of Gilbert and Sullivan operas, classic English music halls, and 1950s musical spectaculars combine to create something very unique and timeless.

One of the first things that is obvious in this production of “My Fair Lady” is the fact that this is a touring show with a major budget behind it all and this is obvious in set design by Michael Yeargan from the very first opening scene and his use of perspectives on stage always made this large Playhouse set seem even larger.  A clever use of a revolving stage for the main interiors of Professor Higgins’ home also allowed two large fixed sets to change seamlessly between scenes as required. Costume designs by Catherine Zuber also added much to the show and were integral in the transformation of Eliza Doolittle from flower seller to a lady of high society. The final added luxury of a live stage orchestra to perform this show’s wonderful music completed the “show package” for me.

With their Edwardian world created around them, the stage was literally set for some fine performances allowing Michael D Xavier (Henry Higgins) and Charlotte Kennedy (Eliza Doolittle) to create a little “theatrical magic” between the two of them that worked so well.  This is so important for this show as although it is in essence Eliza’s story, it is always Henry Higgins who is the lead role in this show for me, and Michael D Xavier was very impressive on stage tonight in this role. There were fine performances too in their respective roles from all of the cast.

Underneath all of the musical fantasy of “My Fair Lady” there are of course many undercurrents just below the surface gloss and we do get with Henry Higgins at times a taste of the complete disregard with which so many people in his position at the time viewed those poorer than them, those of a different social class. One song, "Wouldn't It Be Loverly”, sung at two very different moments in this story sum up perfectly Eliza’s problem now; who is she,  and where does she now fit into the society around her.  There is also of course that rather unpleasant notion that how you speak and how you dress determine your worth to many people as a human being.  Like it or not, that idea governed British society and its class structure of the period (and it still does to a large extent today), and “My Fair Lady” captures the harsh truths of this and the musical fantasy created around it (perhaps in an attempt to soften that reality) perfectly.