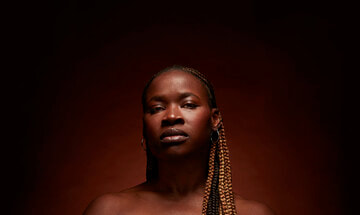 Liz Lochhead's acclaimed adaptation of Medea (first performed in 2000),a new production directed by Michael Boyd  from National Theatre of Scotland at The Hub, is one of the main dramatic productions of this year’s Edinburgh international Festival.

Here we have a meeting of ancient and contemporary worlds as Euripides’ ancient Greek play based upon the myth of Jason and Medea proves that nothing has changed about the human psyche since this was first performed in 431 BC.  In nearly 2,500 years, stories and people have really not changed at all, and every emotion in this story we recognise today and pretty much everything that we now call drama, in all of its many modern forms, owes its origins to Medea and other contemporary works.

What perhaps makes Medea special is that in the absolutely male dominated world of his times, Euripides was giving us a real woman who was forced into many unthinkable actions for the love of her life – Jason. When Jason betrayed that love, he shattered Medea’s very soul, her very being, and this resulted in her taking even more unthinkable actions in her revenge, or in her grief.  How you view this work, revenge or grief, that depends largely upon whose eyes you are looking through, and perhaps the truth is in the fragile state of mental health that Medea is clearly in, and perhaps there are elements of both in her ultimate actions.

Liz Lochhead's Medea is a Scots language re-working of this classic story and to me is what I imagine might happen if she had met Euripides in a pub one night and after a few drinks the two of them had started to write a new story. Somehow Liz Lochhead has managed to stay both true to the original story whilst also making far more accessible to many people by stripping away much of the scholarly academia around it and presenting the story in a language and style that so many people will identify with.

Having said all of the above, when this production started, the contemporary clothes of everyone on stage took a little bit of adjusting to, an almost suspension of reality. Initially the Scots language seemed a little odd and I was thinking that there had to be more to this production that what was in front of me, and there was. Not only is Liz Lochhead a very gifted writer and weaver of words, but Adura Onashile is a very special performer with an ability to completely pull you into a story and weave a spell that beings you into her world.  This whole production rests on the ability of Adura Onashile and she seems to be able to do that with such effortless ease that somehow you accept the contemporary clothing and Liz Lochhead’s Scots dialogue as completely natural to her. With this Medea, this brave and powerful woman centre stage, Adura Onashile makes all the other performances seem like they absolutely belong in this story, in this world, and on this stage, and this allows for some fine performances from Robbie Jack (Jason), Stephen McCole (Kreon), Alana Jackson (Glauke), Anne Lacey (Nurse) and Adam Robertson (Messenger)

This production of Medea is very much a modern and ancient story of female strength and empowerment at the same time, but it is also full of much humour. Here skilfull writing by Liz Lochhead  gives us a Corinthian Princess Glauke who  is a very modern woman that so many of us probably recognise as someone we know, at least a little bit.

Who then was the real Media, was she a witch, an arch manipulator, a murderess, a killer of her own children, evil incarnate, or simply a woman pushed beyond the limits of what she could cope with by those around her whom she trusted the most? Perhaps there is no real answer to these questions as they have been asked now for nearly 2,500 years.