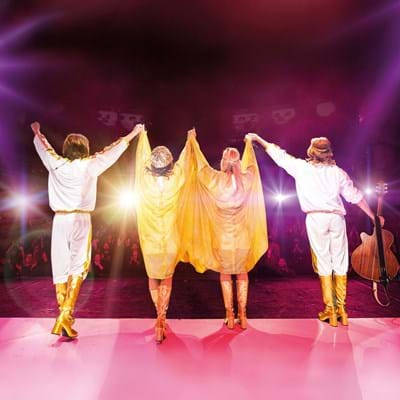 Mania The Abba Tribute was at The Festival Theatre Edinburgh tonight, and this “from London’s West End show” billed as the world’s No 1 tribute band to Abba was pretty much exactly as I expected it to be, for good and for bad.

I have to admit at the start of this review that I came out of my “ABBA closet” many years ago and, for me, many of the songs that Benny and Bjorn wrote were simply the work of two musical geniuses.  Add into that mixture Agnetha and Frida, two of the most distinctive voices in pop music and one of the most amazing vocal harmony duos of anytime, and ABBA as a collective group of talents was always something special.

For any tribute band trying to cover these songs, they face many problems. Amongst them are that to date no one has ever, for me, come close to the vocal harmonies of Agnetha and Frida and many of these songs are deceptive - they look simple to perform, but often they are intricately balanced little moments of pop music perfection and very difficult to re-create.  For me, our ABBA band tonight came at times fairly close, but all too often simply missed that zone and took all too many of these classic songs into Saturday night karaoke land. The only voice that really interested me on any level in the context of the songs in this show was Jo Jo (Frida), and all too often those wonderful vocal harmonies from ABBA songs, particularly those of “Frida and Agnetha”, simply were not there too many times for me tonight.

Perhaps part of the problem for any ABBA show is that it is (like all tribute shows) immediately constrained by the fact that the audience expect certain songs to be there and they are disappointed if that is not the case, so that pretty much means starting with “Waterloo” and ending with “Dancing Queen”.  In between you have to have songs like “I Have A Dream”, “Mama Mia”, and “Gimme Gimme Gimme”, and of course they were here.  Bjorn and Benny are master songwriters and somehow they managed to give upbeat tempos to many classic songs that are actually very dark in their story content – “Knowing Me Knowing You”, and of course the heartbreaking “Winner Takes It All”.  Again that emotional depth to these songs was all too often missing tonight.
This show did also fall into that trap that all too many tribute bands fall into.  Yes, I accept that there is an on-stage visual element that many people will want, and expect in an ABBA show, but is it necessary to address each other as they were really Bjorn, Benny, Frida and Agnetha?  As a band, you know you are not ABBA and we as the audience certainly know that you are not ABBA, and just dropping that pretence does nothing to detract from these wonderful songs.  At times I found the audience a little too stage managed too – often told when to stand up, dance, wave their hands, put their mobile phone lights on, etc, etc. All of this took a fairly tight first half of the show far more into Saturday night musical karaoke night out in the second half but, to be fair, this is exactly what the audience seemed to want and the Mania ABBA team went with it all the way. It would be good though at times for someone to credit the fifth (well, in my opinion) member of ABBA, Stig Anderson, music publisher, music manager and also lyricist for some of ABBA’s best known songs.

On a more positive note, Mania did deliver pretty much what I expected it to do, entertain a pretty full Festival Theatre where many people had taken the opportunity to dress up in their favourite ABBA or 1970s outfits too, and here the show obviously hit its target audience perfectly as pretty much everyone around me, regardless of age, was simply having a good night out and enjoying listening to some of their favourite ABBA songs performed on stage.  In the end, sometimes a show is just what it is, come into the theatre, switch off from any troubles you have in the world outside and just have some fun for a few hours, and MANIA The ABBA tribute certainly did that for many in the audience tonight.