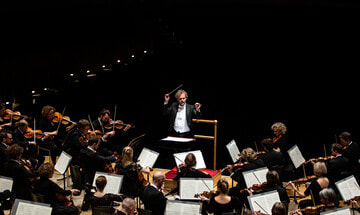 Mahler’s Third Symphony performed by Royal Scottish National Orchestra at the Usher Hall this evening as part of this year’s Edinburgh International Festival was by any definition of the word a large event.  Here, we not only have the sheer performance time of Mahler’s six movement masterpiece (100 minutes plus), an orchestra used to its fullest for music, but also a choral choir (well 2 actually, members of the Edinburgh Festival Chorus and RSNO Youth Chorus). We even have real church bells from Liverpool being played tonight. With an opening movement of some 30 minutes alone, this work is often to us more like smaller symphonies merging into one larger work, but not to Mahler; surviving notes clearly show that he saw this as a complete and unified work that almost like water flowing often moves back and forth within itself to collect outlines of previous themes and expand upon them in later parts.

This work is at its simplest form Mahler’s response and praises to the wonders of the world of nature, the wonder of the very creation around him, and to God, and our opening movement with Pan awaking clearly sets this work and this grand story in motion. In Greek mythology, Pan is the embodiment of nature itself, and the new world awakening here also has obvious Biblical overtones too.  Within this new world, everything that we know is being created in Mahler’s following movements, flowers and fauna, the animal kingdom, man himself, the angels and perhaps most importantly, love.  Had Mahler included his planned seventh movement, this work would have taken perhaps a more circular story path into a cycle of the perpetual renewal of nature.

There simply is not enough time in this review to even scratch the surface of Mahler’s creativity here, let alone start to examine the technical musical aspects of a master composer at work, but the sheer range of his vision has to be commented on somehow.  With his third symphony, Mahler is not simply writing music, he is recreating the very sounds of the world around him and this takes us from music that whispers so quietly that it is almost just floating away on the air itself to sounds of such power and force that it is at times like being hit by some physical force. In between these two extremes, an immersive experience in sound and music. It is perhaps even more than this, Mahler is almost painting with sounds and music here, and tonight Thomas Søndergård conducts the RSNO, with both bringing Mahler’s Third Symphony to vibrant life, in much the same way that Pan brings the world and nature into life in the first movement.

At the opening of tonight’s performance there was a special musical tribute “For Zoe”. Written by Sir James MacMillan, this new five minute work was to remember the life and work of Zoe Kitson, Cor Anglais player for the RSNO and then Royal Liverpool Philharmonic Orchestra.