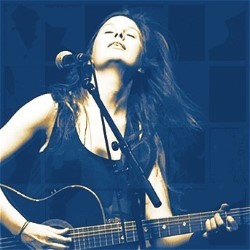 Liz Jones and Broken Windows were playing their first Edinburgh Festival Fringe show tonight at Pleasance at EICC – Lomond Theatre and this was a long overdue event as, since their formation some seven years ago, the band have been working away refining their very own distinctive identity as a blues/rock band.

The last time that I saw Broken Windows was at the very start of their musical journey when they were support to Hanna Aldridge at the Voodoo Rooms in 2016, and since then, like many bands, the line up has changed a little, but that core duo of the very identifiable vocal style of Liz Jones and the always over the years impressive talents of John Bruce on lead/rhythm guitar has been a musical partnership that has created something very unique on the Scottish music scene. Liz Jones is also a songwriter and with some songs tonight coming from the band’s latest album “Bricks & Martyrs”, it is obvious how much both this musical partnership and Liz Jones as a songwriter have developed over the years.

This evening, the set-list was a mixture of some earlier songs, a few cover songs, and obviously some songs from the new album, and like all good songwriters Liz Jones is taking her inspiration from many people and events in her own life and also events around her that in one way or another prompt her to add her voice to their passing, often to bear witness like many of the old blues masters did with their own songs.  From the new album, songs like “Jo”, “Stain” and “Angel” are clear indications that there is something a little special about both Liz Jones as a vocalist and a writer, and if you get a chance to listen to it, all eleven songs on “Bricks & Martyrs” have something of relevance to say to us all.

Outside of the new album, songs like “Mother Earth” and “No Classic Love Song” highlighted the diversity of music that Liz Jones and Broken Windows are capable of delivering to an audience, and if some classic cover songs from the past are what you want to hear at times, then they can do that too. A cover of Bonnie Raitt’s “Don’t Advertise Your Man” (itself a cover of the Sippie Wallace version) just seemed to be the perfect vocal space for Liz Jones this evening. Another fine cover of a well know classic, “Ooh La La” by The Faces was, from the smiles on the faces of John Bruce and Liz Jones, obviously a song that they (and the band) were having a lot of fun performing on stage.

Liz and John are of course not the only members of this band, and the distinctive contribution to the Broken Windows sound over the years of Suzy Cargill (percussion, mandolin) and Rod Kennard (bass), has to be mentioned. Jamie Hamilton (keyboards) and Gary Davidson (drums) also now add their own musical identities to the band’s sound. This evening they all came together as Broken Windows, a band that was obviously happy to be on-stage performing to old and new faces alike.

Liz Jones and Broken Windows pay homage to the music that has inspired them over the years, but they are also adding their own songs, words and sounds to the contemporary Scottish Blues/R&B/Rock music scene.