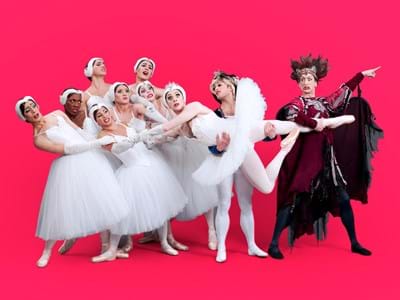 The Trocks: Les Ballets Trockadero De Monte Carlo are at the Festival Theatre for two nights only plus some daytime workshops (Fri 21 and Sat 22 Oct), and as always the theatre was full of their many devoted fans.  Just what is it about this all male comedy dance company that makes them so popular with audiences across the world?  Well tonight (their 11th season at the Festival Theatre) I decided to try and find the answer to that question, and to be honest I still have not really found out as for me “The Trocks” are a bit elusive and an acquired taste.

If you have already been to a show of “The Trocks” this next bit needs no explanation, but just in case you have not a very brief introduction is required.  The dance company was founded nearly 50 years ago (1974) as very much a “minority interest” all male dance company in the meat packing area of New York. The choice of the company to not only be an all-male one, but also be one that let dancers train and perform the classical female roles was, shall we say at the time, less than well received in many circles.

Today times and the attitudes of many people (but still not enough) have thankfully changed and the company have over the years been one of the driving forces in that change. The Trocks is far more than just a performance company, and for many people in the company (and outside of it), it has been a positive life changing experience. Perhaps a big part of their success off-stage is that the company do not “push” any agenda, they do not “force” any change, but instead show possibilities and wait for people to embrace them when their time is right.

Performance wise, there is nothing to fault in anything that they do, and tonight was no exception to that. Many of the dancers with this company join after already having years of training in various dance disciplines and styles, and classical ballet is often one of them.  With this company they also extend that training into the female roles and particularly the very demanding area of “en pointe” techniques.  This company do exactly what they say they will do, and comedy ballet is what they do, and they do it very well. Getting the very unique and often over-exaggerated (deliberately) choreography and comedy treatment this evening were some scenes from much loved classical ballets :

Everything about “The Trocks”, including the stage names of the dancers, is designed for comedy effect and here in the UK with our long traditions of music hall and pantomime we are no strangers to this form of on-stage subversion and anarchy. Here though, the performance is by trained and talented dancers who adapt with deceptive ease (well at least to the audience) to performing both male and female roles.

Watching male dancers performing the female roles in ballets with often a lot of en-pointe work is for me both surprising and at times a little odd. Yes, the ballet technique is there, but you are never under any illusion that this is a male dancer performing a female routine as there is none of that grace and poise that a leading ballerina who has trained since a child has on stage. Somehow this is a completely different body language. To be fair, the dancers know this too, and it is all part of the “in joke”, part of the wider comedy spectrum that is any “The Trocks” performance.

Les Ballets Trockadero De Monte Carlo do exactly what they promise their audiences they will do on stage and the pleasure that they are giving to their audience tonight was obvious throughout the whole show.

This time it is simply a matter of personal taste as I obviously like my favourite ballets without comedy elements in them, but I also, having watched tonight’s show, accept that there is room here, as in everything in life, for different tastes and opinions to get along together. Neither one opinion is right or wrong here, all viewpoints are valid, and that is very much the ethos of the whole company – respect for everyone.