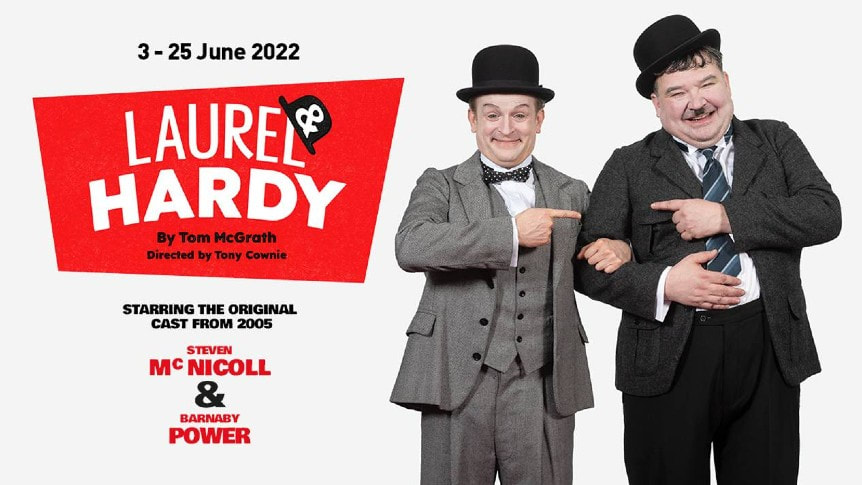 Laurel and Hardy by Tom McGrath and directed by Tony Cownie is at the Lyceum Theatre Edinburgh for most of this month (03 to 25 June) and it is fair to say that this show is one for the fans of the iconic comedy double act.

This show sees a return to the stage for this show after nearly 20 years (2005), but this time  Barnaby Power (Stan Laurel) and Steven McNicoll (Oliver Hardy) are closer to the age that our comedy duo would have been in real life and there is a reflective air of melancholy about this performance that I think you need to be a certain age as a performer to deliver convincingly to an audience.

This show is what I call “no hiding theatre” and by that I mean that it is stripped back both performance and production wise about as far as you can. There are only ever three people on stage, the comedy duo and pianist John Beales. The set by Neil Murray is very simple, but very effective, relying on only a few basic props and a simple backdrop,

The format of telling this story has an interesting twist to it as we meet the duo after they are dead, but obviously still together as they were in life as they recall their life both on-stage and off-stage. I have to presume by the amount of white everywhere that they are in some sort of heaven and not consigned to some theatre critic’s version of hell.

As you would expect in a story like this, we start at the very beginning with the birth of Stan Laurel  (1892 – 1957) aka Arthur Stanley Jefferson into a theatrical world in Ulverston England and Oliver Hardy (1892 – 1957) aka Oliver Norvell Hardy born into very different circumstances in Harlem, Georgia.
It was on paper highly unlikely that the two men should ever meet, but Stan set sail for America and hopes of fame and fortune in 1910 with an equally unknown Charles Chaplin, and the two shared a cabin and toured for two years together with Stan as Charlie’s understudy.  Sadly the rise in fame and fortunes of one of them was equally reflected in the opposite direction for the other, but Stan did eventually get the movie contract that he wanted, but at a price.  At the same time, Oliver Hardy was trying to establish his own film career, but it was not until a director had the idea of pairing the two together as a comedy duo that real on-screen magic happened, and the rest, as they say, was history.

Laurel and Hardy made a lot of short two reelers (standard for the times) in the silent film period, but unlike so many of their comedy contemporaries they were not only able to survive the transition to “Talkies” but thrive in this new era.

All of these events are captured with real warmth and emotion here by Barnaby and Steven as they bring a very tight script and the comedy duo into life on the Lyceum stage. The comedy timing between Barnaby and Steven is as good as you are going to get, and their recreation of a few of Laurel and Hardy’s classic on-screen moments is a pleasure to watch.  Of course the comedy duet song “The Trail of The Lonesome Pine” from their 1937 film “Way Out West” had to be here this evening and this scene was probably the most recognisable of the show. Anyone out there who remembers this song and the duo being a chart hit in the UK in 1975?

It is when we re-visit the personal lives of the duo that this show really works for me as we are able to get underneath two slapstick comedians in hats and get glimpses into what really made them “tick”.  The real life friendship between the two of them was genuine and they both shared many commonalities (multiple marriages being one of them), but they were also, we find out, very different men. Stan was the real comedy genius writing and directing many of their films throughout the height of their fame and getting involved in many other pre-production areas. His almost workaholic schedule was contrasted sharply by Oliver Hardy who had other off screen interests including betting at the horse races.

This production of Laurel and Hardy, judging from the audience age tonight, perhaps shows that the duo are not reaching a younger age group these days and that is a pity as anyone out there interested in becoming a comedian on stage or in films can learn so much by simply watching two masters of their craft at work.  As we find out here, the golden age of slapstick comedy was in the silent film era; talkies did the genre no favours. Without sound, the visual humour was universal across the globe and Rowan Atkinson and the creative team behind Mr Bean recognised this and proved that there is still a huge international market out there for this style of comedy.

It is perhaps hard to understand just how popular Laurel and Hardy were at their peak. Not only were they huge stars entertaining millions of people every year with their films, but here in the UK they were on the front cover of Film Fun comic every week for many years.  There was also a late 1960s cartoon show featuring the comedy duo.

It is easy to forget that Laurel and Hardy did tour theatres with live stage performances, and visited the UK more than once. One of their very late in life performances was at The Empire Theatre (now The Festival Theatre) in Edinburgh in 1954. Sadly this was to be only a few years before the death of Oliver Hardy, but tonight’s show gives us a little glimpse on another Edinburgh theatre stage of just what this show might have been like at times.