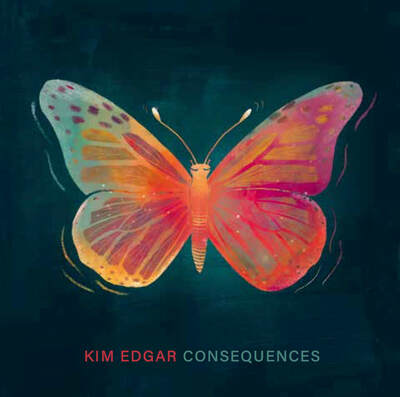 Edinburgh-based songwriter Kim Edgar releases her fifth studio Album CONSEQUENCES on Friday 3rd February 2023.  This album was born out of a year-long project from October 2021 to September 2022 in which Kim Edgar wrote and recorded each month a new piece of work with a different creative collaborator from Scotland (and further afield), and their uniquely different contributions have combined to create an album that has much to say about how interconnected all of us really are in this world to not only each other but to everything around us on the one thing that we all share together - planet Earth.

Kim Edgar has a gift of writing melodies that draw you into her music to often reveal words of real power that tackle dark and difficult subject matters that lesser songwriters would simply avoid, and this album has so much to say in words alone.  It is obvious that Kim has chosen her creative collaborators well as, despite the diversity of collaborative talents on this album, the end result is one of different voices sharing a single vision.

No action, no words are ever without consequences, no matter how small or insignificant they may seem to be at the time, and the cover of this album, a painted butterfly, is a reminder that one set of wings flapping into flight may seem inconsequential, but untold millions of butterflies taking to flight is another matter altogether.

The 12 songs that make up CONSEQUENCES are a reminder that all actions no matter how large or how small are connected. All of us by our own actions (very small and very large) are having a devastating effect on planet Earth as the effects of global climate change become more and more devastating with every passing day. Across the globe, war and regional conflict (often over land resources) devastate the lives of those trapped in conflict zones. What connects both of these global terrors is the impact they have on those least able to cope with the consequences – the poor, the weak and all too often the children.

You do not have to be suffering directly from global warming or war to be in trouble, to need help, to need someone to help your voice to be heard, and Kim Edgar and her collaborators on this album are so often writing words and music that speak to a wide audience of people whilst at the same time have that ability to be very personal to the “one”.  Even if any one of these songs does not have a specific connection to you, there are words here, truths here, that should make many people stop and think about the ways that we are all connected in this world in some way or another through the consequences of our own individual actions.

Many of the collaborators on this album - Boo Hewerdine, Horse McDonald, James Grant, Rachel Sermanni and Louis Abbott (to name a few) I have seen perform live over the years, so this album has for me been interesting to see how they have worked with Kim Edgar on new words and music, and the end results have often been surprising (in a good way). This album has also introduced me to the talents of new songwriters, and that is always interesting.

To try and select a few tracks from this album as personal favourites is difficult as they are all different and interesting for many reasons in their own way, but “Save Myself” is of interest for the fact that it features two of my favourite singers - Kim Edgar and Horse McDonald. Here two very different and very distinctive vocalists work well together and both have that love of the power of words in their work.  For very different reasons, “The Edge of Shame”, “It Only Takes a Silence” “Cornerstone” and “Ripples” stay in my memory after listening to this album a few times, but If I had to choose a favourite here it would be “Whisper Pink” written with Louis Abbott – a beautiful melody that matches both vocals perfectly.

As always, the care that Kim Edgar and her team have put into any album shows here not only in the music, but the studio production values and attention to every detail down to the graphics and the packaging of the album.