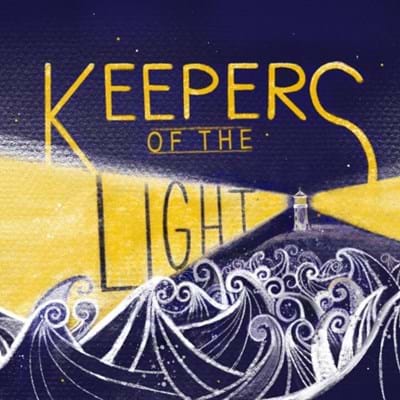 Keepers of The Light has two dates at The Festival Theatre Studio (06 and 07 May) and I was at the 5pm performance of the show today for this review. From the title, you might be forgiven to thinking that this is some sort of mystical almost religious journey into self-enlightenment, and in parts, all of these things might apply in some way here too. “Keepers of The Light”, a story based on the never solved mystery of what happened in December 1900 when three keepers disappeared from their post on the Flannan Isles lighthouse, 20 miles west of the Outer Hebrides.  Over the last 100 years and more there have been so many explanations given here, the official one based on known facts (but incomplete) and many more fanciful and even mystical ones. To survive in these isolated and often harsh working environments a man also had plenty of time for self contemplation and a belief that ultimately their fates were always at the mercy of the forces of nature and a “higher authority” than any of them.

If you are of a certain age (like myself), then the chances are that you know of the story of these keepers through the poetry of Wilfred Wilson Gibson and his lengthy 1912 poem “Flannan Isle”.  For some reason the first verse seems forever imprinted upon our memories and has become part of our own “second/false memory” stories.

“Though three men dwell on Flannan Isle
To keep the lamp alight,
As we steered under the lee, we caught
No glimmer through the night."

Through this poem, many of us somehow feel a connection with the three lost keepers, something inside of us still wants to know what really happened to them on that remote lighthouse as they endured such unexpectedly violent weather conditions (as recorded in the lighthouse logs). For writer Izzy Gray there is a more direct, more personal connection for her to the unexplained fate of these three men as her Grandfather was a lighthouse keeper and also, coming from Orkney, stories of lighthouses and the sea are part of her family heritage, part of their collective personal stories.

There are no lighthouse men left as we know them in this story, the last British lighthouse went automatic in 1998.  There are, however, still maintenance crews that have to visit the lighthouses and check on their control systems.  It is by the clever use of one of these modern crews arriving at Flannan Isle lighthouse that Izzy skilfully manages to write us a very tight story with at times much humour to integrate the original keepers and their story with the present day.  Along the narrative of this dual story telling adventure format we have the practical, the most likely, and the more fanciful strands to this story interweaving with one another and the ending leaves the audience to decide which story they want to believe in the most – fact or fiction.

Bringing our three lighthouse keepers/maintenance crew to life are Rhys Anderson (Donald & Mac), Fraser Sivewright (Tam & Alec) and Garry Stewart (Jim & Davie), and each is such a natural story teller of words that with Izzy’s tight script and natural flowing dialogue to work from, the trio pull us effortlessly into that tiny, self-contained world that the three men, past and present, are in and effortlessly move between these two worlds. There is also a reminder of how easily the forces of nature, the winds and the waves can potentially cut off modern day methods of communication and transport and so swiftly leave three men, separated by over 100 years in time, at the mercy of forces outside their control.

Much of the atmosphere, much of that sense of reality to “Keepers of The Light” of course comes from those stories of lighthouse keepers that Izzy Gray grew up listening to and it is hard to imagine how simple things like the relentless noise of moving machinery could play so heavily upon the thoughts of men who had nowhere to escape from it. There is also a nice tie-in here to writer Robert Louis Stevenson’s family connections to lighthouses and also his family connections to one man in this very story.

Were the three men simply, as many believe, simply swept into the sea, or did darker and ancient forces have their hands in their fates? We will probably never know the answer to that question, but with works like “Keepers of the Light” that story and its almost endless possibilities seems destined to be told and re-told for a long time to come.

All of the story is played out on a simple yet effective stage set by Danny Main, and it is for me important to note here that materials supplier for the set was Reset Scenery, a non-profit organisation committed to reducing waste in short productions for stage and screen.