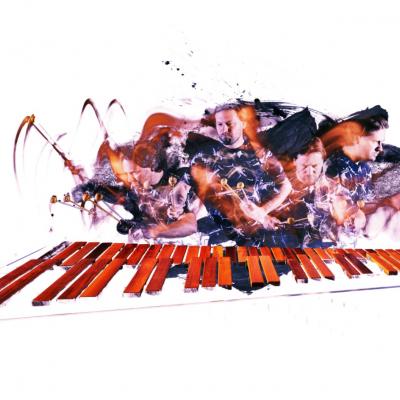 Joby Burgess was at the Queen’s Hall Edinburgh, a stop off date on his current tour to both promote the new ‘songs without words’ of his latest album “A Percussionist’s Songbook” and perform them live on stage.

This new album is a collection of specially commissioned works from creative friends that Joby has often worked with (or hoped to work with) over the years of his impressive musical career. On this new album John Metcalfe, Tunde Jegede, Dario Marianelli, Yazz Ahmed, Graham Fitkin, Dobrinka Tabakova and Gabriel Prokofiev have created a soundscape of wonder, beauty and at times fragility for master percussionist Joby Burgess to bring to life via an impressive array of both different percussion instruments and different styles of playing them.

This new album also features two new works from Joby Burgess himself who explains that time rarely allows him the opportunity to compose his own material, and that is a loss for us all as his own compositions are full of expressive subtlety and beauty explored in the colours of sound.

The full programme (album) performed this evening is at the end of this review, and the music created and performed took us not only across the world, but to many different cultures, styles of music and sources of inspiration as the very different composers each have not only their own unique musical identity, but often their own very successful field of musical speciality.  It is, for me, perhaps the diversity of the inspiration behind these so carefully constructed audio landscapes that makes this collection of music so interesting.

In “A Percussionist’s Songbook”, perhaps the most ancient sounds known to humanity, those of striking one object against another meet with Moog synthesisers, 21st century computer technology and sound loops to bring together the diverse strands of the poetry of Robert Graves and Birago, novels by Michael Ondaatje and Isaac Asimov. Political speeches and commentary on the world’s ever increasing population also serve as backdrops to created works performed tonight.

Joby Burgess is a unique talent whose creativity has seen his involvement with musicians and people from many different walks of life and his journey has taken him into many film, television and recording and performance projects, and “A Percussionist’s Songbook” is another impressive step in this already impressive career. It is clear to me that Joby Burgess clearly understands that sound is one of the building blocks of the world (and perhaps the universe) around us, and one of the great binders of cultures and people across the world both now and as it has always been throughout our recorded history as people on this Earth.

This concert was also a classic example of a venue perfectly matching the performance on stage as to hear a work like “A Percussionist’s Songbook” it really has to be brought into life, into a vibrant and ever changing soundscape by a very special acoustic venue, like the one that the Queen’s Hall has to offer.