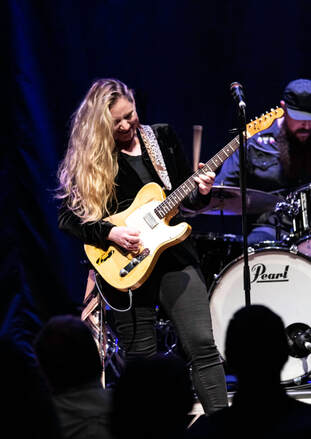 Joanne Shaw Taylor was at the Queen’s Hall Edinburgh tonight as part of her current tour and promotion for her new album “Nobody’s Fool”, released on 28th October and produced by Joe Bonamassa. As you would expect, the main focus on the set list was songs from the new album, but this left plenty of space for more than a few from earlier albums plus a few surprises.

There are a lot of very good R&B/Blues guitarists out there at the moment, so what is it about Joanne Shaw Taylor that not only makes her stand out from so many other players, but has let her do so for so many years?  Well, tonight’s performance answered both of those questions for me very quickly. Firstly, there is her obvious talent as a guitar player, someone who is clearly comfortable in many different styles of playing, but someone who is always clean, sharp and very precise. Secondly, Joanne has a voice that is full of soul, full of emotion, and she knows how to use that to get the most out of every song.  Thirdly, and perhaps more elusive than the first two things, Joanne Shaw Taylor knows how to connect with her audience, and her obvious pleasure at playing music and performing it in front of a live audience is infectiously shared with everyone in a room.

There is a depth to Joanne Shaw Taylor’s songs that, for me, raise her above many similar songwriters around her, and songs from the new album performed tonight, included (amongst others) “Nobody’s Fool”, “Won’t  Be Fooled Again” “Runaway” and my favourite song of the evening “Fade Away”.  The last song is perhaps the most important song on this new album because it is a very personal song to Joanne, almost a musical letter from daughter to mother (who died in 2013). Here, unlike a song like “Runaway” which we were told is “just a song”, “Fade Away” gives us all a chance to see and hear that this is a songwriter who is not afraid to let us into her inner feelings when the time is right to do so. The loss of a loved one is something that we all have to deal with at some time in our lives and how we deal with that is a different experience to every one of us. A song like this does, however, give an emotional connection that many of us will understand in our own way.  This song was also the only opportunity of the evening to hear Joanne play acoustic guitar.

There are so many other songs from tonight that are worth a mention, but only space to cover a few of them, so in no particular order of preference, a cover of “Two Time My Lovin’” by The Fabulous Thunderbirds, “I’ve Been Loving You Too Long”, “If You Gotta Make A Fool of Somebody” and “Dyin’ To Know”.

There is Blues, there is Soul, but perhaps most importantly, there is fun in Joanne Shaw Taylor’s music and often tonight I was reminded of elements of some of my favourite songs and bands from the ‘60s, ‘70s and ‘80s weaving their way through the music. By that I do not mean that anyone is being copied, but somehow, there is always that feeling of music from another time being made new for a contemporary audience, and all of this is underpinned by Joanne Shaw Taylor’s music and songwriting, both clearly showing someone who understands where the roots of so much of this music are coming from.

Joanne Shaw Taylor is without doubt one of the best R&B/Blues guitarist to come out of Britain (born Wednesbury, West Midlands) in a long time.

Opening this evening’s show was guitarist/singer/songwriter Jon Allen who has to date released five albums and, if the selection of songs performed tonight in this 30 minute set are anything to go by, then I need to track down his back catalogue.  Jon Allen is clearly not only comfortable playing a variety of guitar styles (on acoustic tonight), but also an interesting songwriter as “Bad Penny”, “Dead Man’s Suit” and “Lucky I Guess” have their own very unique feel to them.