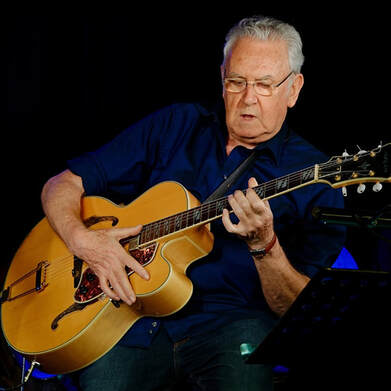 Jim Mullen was at Assembly Roxy tonight performing for the opening night of The Edinburgh Jazz and Blues Festival 2022. It has been too long since I last saw Jim Mullen perform on stage (2015), but it was worth the wait as this show “Jim Mullen: Burns” takes one of the world’s premier Jazz guitarists firmly back to not only his Scottish roots, but an obvious love for the words and the songs of Robert Burns.

To bring these songs to life in a very distinctive jazz style, Jim had three very good musicians with him on-stage - David Milligan (piano), Mario Caribe (bass) and Max Popp (drums), and each added his own very distinctive sound and contribution to this project.

Normally I don’t give set lists away, but this is a one-off show for the EJBF, so this time I am comfortable with breaking that rule. Over a performance of roughly one hour, the worlds of traditional and jazz music combined to produce something very unique with interpretations of

It is sometimes overlooked that Robert Burns was, as Jim Mullen told us all, a collector of traditional songs during his lifetime, and his own words were later to become forever attached to many of these older melodies and, without him, much of this rich musical history might have been lost forever. Here are songs of a love found, a love lost, a love of the landscape and paying for your drinks at the bar.

For some people, the idea of it taking an hour to perform six Burns songs (without words) as everyone has their own instrumental musical solo to play might not be to their liking, but this is the Edinburgh Jazz and Blues Festival and this is Jim Mullen, one of the world’s great jazz guitarists on stage with some very skilled jazz musicians. This show was what I expected and somehow in my mind’s eye I can see this all being very similar to how Robert Burns might have enjoyed an evening of music in a tavern somewhere with his favourite drink and favourite “lassie” for the evening; good musicians coming together to play songs that he liked with everyone adding their own individuality to the music and the evening. In this respect, the styles of jazz and traditional music are not that far apart from each other and that ability to improvise around a central musical theme is essential to both genres.

In the end, music is just that, music, to be heard and enjoyed, and Jim Mullen, the band and the audience were all obviously enjoying these songs tonight and I think that Robert Burns would have been just as appreciative as all of us of were of those beautiful warm tones that Jim Mullen can produce whenever he plays anything on guitar.