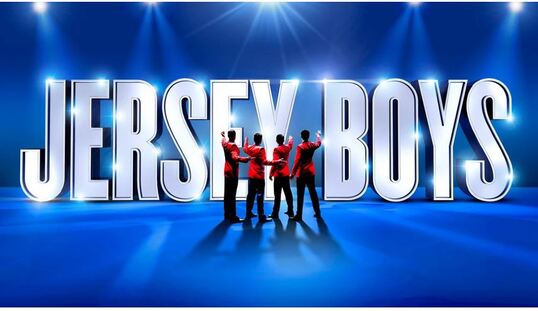 Jersey Boys is at the Playhouse Theatre Edinburgh from Tuesday 24 January to Saturday 4 February, and, as usual, this show is a hit with audiences of all ages.  Since its initial stage performance in 2005, this documentary style story about 1960s group The Four Seasons has become a major international hit show winning many major awards and selling millions of tickets, and as always tonight, it was easy to see why this “juke-box” musical is so popular; it not only has some great songs in it, but it also has real depth to the story of the four original members of the group, and telling a story like this within the time limits of a show whilst still keeping narrative and music moving forwards (and backwards in this case) is a skill that few writers and producers have.

For many people in the audience this evening, they are simply too young to remember hearing for the first time the that unique sound of The Four Seasons pop group in 1960 when three local young men from New Jersey - Tommy DeVito, Nick Massi and Frankie Valli (who had all been in earlier bands together) met songwriter and soon to be fourth band member, Bob Gaudio. With songs like Sherry, Big Girls Don’t Cry, and Walk Like A Man, the band moved swiftly from obscurity to a seemingly endless stream of hit songs in their native USA and across the world.

The Jersey Boys by its very success as a stage show, and the audience’s reactions tonight, proves that these songs which Bob Gaudio wrote for the band and for Frankie Valli were, and still are, classics that have survived the test of time.  To bring these songs to life on stage though, not only are four very good performers always required, but four people who each have their own distinctive identities that on stage combine to re-create that classic The Four Seasons sound.  As well as recreating that sound though, we still need four people with the dramatic ability to convincingly tell us, the audience, their story.  Tonight that task fell to Michael Pickering  (Frankie Valli),  Blair Gibson (Bob Gaudio)  Christopher Short (Nick Massi) and Dalton Wood (Tommy DeVito) and both individually and collectively they brought the story of Jersey Boys to life.

What makes Jersey Boys such an entertaining work of theatre for me though is not just the music. Even if you take the music away from this show, you are still left with a great story of young boys from a neighbourhood where life choices were limited becoming huge successes. As each of our band members tells their story as they remember it, we find out that not everyone remembers everything the same way and that the public on stage/on screen image of The Four Seasons was so often a PR illusion and that in reality tensions and grievances within the band were tearing it apart almost from the very start.  Here we have glimpses of the reality of being one of the band away from the gaze of the public.  In Jersey Boys, old connections to organised crime from the neighbourhood some band members grew in are never too far away from the surface, personal trusts are broken, and for some, just as they think that they are on top of the world again, personal tragedy strikes them hard.

Despite all of the above though, Jersey Boys is a story of friendships both very close and broken over the years, a story of duty to the past, that famous “Jersey Handshake” contract, and most importantly the one thing that always bound everyone together, the music that they made together. What makes this show work is getting the right cast and production team together to re-create a little bit of all of this on stage, and in this show tonight, everyone got things right.