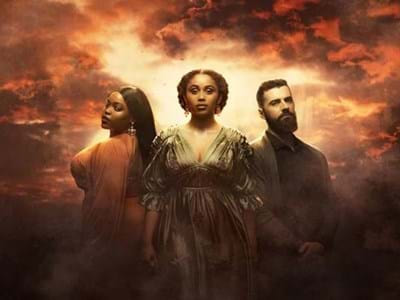 Raw Material & Capital Theatres in association with the National Theatre of Scotland present James IV – Queen of the Fight at The Festival Theatre Edinburgh from Friday 30 September to Saturday 8th October, and if you have any interest in first class story-telling and Scottish history, then try not to miss this production.

This World Premiere is the fourth instalment in a series of works by Rona Munro about Scotland’s Kings and Queens, its history, and its sometimes unexpected mix of cultures.  Although “James IV - Queen of the Fight” is a stand-alone work, it also clearly follows on from her ground-breaking story-telling of the James Trilogy (King James I, II and III) series.

The history and the stories that Rona Munro is telling in her historical works here are important for many reasons, and perhaps for me the most important reason is that when I was at school (1960s/1970s), Scottish history from the period prior to Mary Queen of Scots and her son James VI was for the most part simply obliterated from the lessons and, even if it was told in the passing, it would usually be from an English re-written viewpoint of Scottish history. It was only when I left school and started to research this period in Scottish history for myself that I started to discover our nation’s own rich history and cultural diversity, and sadly as we will hopefully find out in later works to come in this series, King James VI (later to become King James I of England) was, in my view, responsible for much of what was to follow in our national identity as he never again referred to himself as King of Scotland once taking the unified crowns.

This work, “James IV - Queen of the Fight” is, as we are told, based on facts. The people in this play, and the people that characters are based on, did exist in real life; the words of the poetry, the dances, the songs and the core of the history are recorded and there for anyone who wants to read or research further the events that this play covers. This work is of course also a theatrical production and not an historical re-enactment, and with a clever and lively script, Rona Munro has here (as she did with the James Trilogy plays) created not only characters that we can identify with, but given them words that we will both understand and have relevance to us in our contemporary world. There is not a moment in this production where the story falters or drags in time, there is always something happening here to engage you with the story unfolding on stage. In bringing this story to life, Rona Munro is of course using a fair around of creative licence with her words and some people might not like that approach, but here it works and Rona Munro has a gift for making what could be a dull historical work something that instead both engages and entertains an audience whilst also giving these historical events their own spotlight for perhaps the first time for many people.

Bringing any work like this to the stage is a complex collaboration between many people and much of that work takes place unseen behind the stage in production and post production work. What we do get to see here is a stage set and, at times, very subtle lighting effects that gives this production much of the atmospheric feel that it needs, and of course some fine performances by the main cast – James IV (Daniel Cahill), Dame Phemy (Blythe Duff), Queen Margaret (Sarita Gabony), Dunbar (Keith Fleming), Peter (Thierry Mabonga), Donald (Malcolm Cumming), and of course the two central women in this story Ellen (Danielle Jam) and Anne (Laura Lovemore).  There is no one performance to pick out here as everyone is so well suited to their respective roles and how their character and story works as part of a larger story and a larger world here.

There are many stories folding over into one here – James IV’s eventual victory and subjugation of the highland of Scotland and the “Lords of the Isles”, the attempts at peace by marriage between Scotland and England, Scotland’s identity and an independent nation and the cultural mix that was society of the day and, of course, of the Royal court.  Who exactly were the two black women that Ellen and Anne are based upon, who really was Peter (a black man at the Royal court)?  Why were these two women on a Portuguese boat?  The answers to these questions are not actually known, but the answers may not be the obvious ones that many people would attribute to them today, and the story of how an independent African society and trading culture inter-acted with Europe at this period in time is as they say “a story for another day”.

I am deliberately giving little about this play away in this review, even why it is called “Queen of the Fight” as I think it important that there be no “spoilers” here and that anyone who goes along to the theatre finds out everything first hand as there are some real surprises here that clearly illustrate that history is not a collection of dull facts but instead something whose strands reach out and shape the future (for good or bad). Some of those strands from this history are still shaping some of our thoughts and perceptions today whether we like to admit it or not.