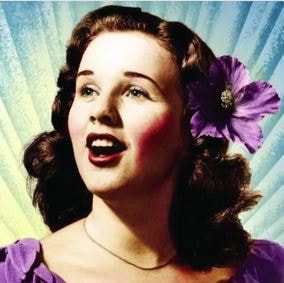 Ingenue, Deanna Durbin, Judy Garland is a new show at this year’s Edinburgh Festival Fringe by Melanie Gall and is on at theSpace @ Surgeons’ Hall.
In the U.K. it is, I think, fair to say that for many years, the life and legend of Judy Garland has eclipsed for many that of another young singing film star of the same era, but things were not always that way, and for many years it was Canadian-born Deanna Durbin who was by far the biggest movie and recording star of the two of them.

Ingenue, (French an-zhey-ny - an innocent or unsophisticated young woman, often in a play or film) is an apt title for this production as both were teenagers when signed to MGM, but whereas Judy Garland was born into a theatrical family, Deanna Durbin’s background could not have been more different.

In this meticulously researched and perfectly timed show, Melanie Gall gives us an insight as she plays the role of a now long retired from Hollywood Deanna Durbin being asked about her thoughts on the untimely death of Judy Garland.  What unravels through flash-back memories is a story of two one-time close friends who were destined to become rivals, at least in the minds of publicists, newspaper columnists, audiences, and perhaps even for one, personally.

Through songs like When They Begin the Beguine and Somewhere Over the Rainbow, interwoven with stories, we get to the real truths of this rivalry and at its heart it is a story of how fame was to affect two young Ingenues in two very different ways.  One was to handle the pressure of fame badly and the other - well go and see the show and find out.

Fate, fortune, good luck, bad luck, whatever you want to call it plays an important part in this story, so be prepared to have some of film myths re-written.
If you are a Deanna Durbin fan then there is a chance to also buy Melanie’s new book, the first full biography of Deanna Durbin (available from all good bookshops soon).