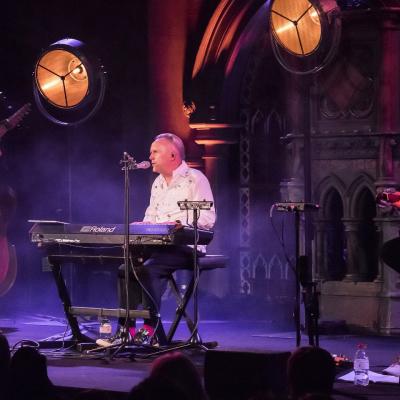 Howard Jones Acoustic Trio with Nick Beggs & Robin Boult were at the Queen’s Hall Edinburgh tonight performing a mixture of new and classic Howard Jones songs (plus a surprise or two) and, as you would expect, the fans (old and not so old) were there too.

The last time I reviewed Howard Jones was at the Queen’s Hall in 2019 and that show was a full electronic keyboard (lots of them) tour and in stark contrast to this stripped down acoustic one. That change of course means re-arranging some of these classic songs, but out of the two very different shows this is the one I prefer, as this return to almost simplicity allowed everyone to hear and see underneath all of that keyboard techno and studio production gloss the compositional complexity and lyrical quality of everything performed tonight.

On stage with Howard Jones were two very gifted musicians, Nick Beggs (a founding member of Kajagoogoo) and Robin Boult. For anyone out there wanting to become a professional bass player, check out Nick Beggs as his skills are exceptional. This evening saw him moving effortlessly between bass guitar, a very modern/minimalist style upright bass with neon strings, and the always odd looking Chapman Stick. If you are going to attempt to play the ten or twelve individually tuned strings of this instrument that allows both bass and melody line possibilities, then you really have to have a very high musical skill level at your disposal, and Nick Beggs just made it all look so casual and effortless all evening.

Complementing Nick on 6 and 12 string guitar was the equally impressive skills of Robin Boult, and watching the two of them, left and right of stage, communicating wordlessly with one another all evening to weave their musical skills around Howard Jones (centre stage) was a pleasure. At times, the trio seemed to be working more like a jazz ensemble who were constantly improvising on musical themes and musical lines and it takes a long time for any ensemble of musicians to get to this point where everything is so instinctive.  With two such exceptional musicians on stage with him, Howard Jones always had the luxury of performing on his single keyboard, taking his music in any direction he wanted to, and always knowing that Nick and Robin would be there with him, wherever that music was weaving its path.

Somehow, with this acoustic set that often stripped these songs down to their core elements, it was also clear to see just how interwoven they are with Howard Jones and his own personal approach to life and some of his wider beliefs in the ultimate good of people, our distinctive individuality and what we all can achieve if we work together for our common good. Also in here too were glimpses of a wider spiritual belief in our connectivity to the stars and the universe itself.

There was something here for every period of Howard Jones’ music to please the fans – “Assault & Battery” then “Speciality”, both from the 1985 album “Dream into Action” being early crowd pleasers. Of course, later in the show were what to many people are iconic Howard Jones songs - “What is Love”, “Hide and Seek”, “New Song”, and “Like To Get To Know You Well” were on the set list. These songs and others proved that although some of us (including myself) failed to recognise it at the time, Howard Jones was writing and creating pop classics that would stand the ultimate test of time, and for a few very simple reasons only – they are good songs and Howard Jones is as well as being one of the pioneers of electronic music of the 1980s (and beyond) a very gifted songwriter.

Opening this evening’s show (and for this tour with Howard Jones) was singer/songwriter Roxanne de Bastion. At first, Roxanne appeared a little apprehensive as she walked out onto the stage, but this is obviously just “Roxanne” as she not only has an impressive digital presence but also an impressive list of live performances to date.

A lot of the music from Roxanne tonight came from her new album “You & Me, We Are The Same” and many of these songs were born out of that emotional loss of losing a loved one, but also at the same time finding clarity, strength, and new hope during that grieving process. This is a journey that you can only truly understand if, like Roxanne, you have made it yourself and there were more than a few interesting songs and compositional ideas here.