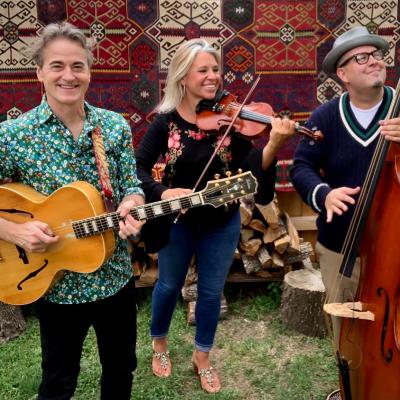 Hot Club of Cowtown were at The Queen’s Hall Edinburgh tonight, the last date in their current shows in the UK before heading back home to Austin TX.  This year is a big year for HCC as they are celebrating 25 years as a band and bringing their own very distinctive style of “Hot Jazz & Western Swing” to their audiences across the world.

I have to admit that until recently I had not come across Hot Club of Cowtown and how, for a quarter of a century I have not, is a mystery to me as this band is one of the best I have come across in a long time and the individual talents of Elana James (Fiddle & Vocals), Whit Smith (Guitar & Vocals), and Zack Sapunor (Bass & Vocals) are, to say the least, impressive.  This is a band and a trio of musicians at the top of their game.

Hot Club of Cowtown are a seamless mixture of the two worlds of Jazz (mostly Gypsy Jazz tonight) and western swing, and clever arrangements merge both worlds seamlessly. Into this musical mix we have the essence of Django Reinhardt and Stephane Grappelli recalling those wonderful sounds of their famous Quintette du Hot Club de France weaving in and out of classic 1940s Americana swing, barn dance stompers and songs of the lonesome trail.

Every member of this band has their own musical identity and the ability to put on incredible solo work when required, and often that was the fiddle (and vocal) skills of Elana James. It is on songs like “Dark Eyes”, a song made famous by Django Reinhardt’s instrumental version, (originally recorded by him as “Les Yeux Noirs” and now a Gypsy Jazz standard and almost musical rite of passage) and “Autumn Leaves” by Johnny Mercer (an English language re-write of Edith Piaf’s classic “Les Feuilles Mortes”) that Elana James shows the impressive level of different fiddle skills required to do these songs properly. An effortless performance of “How High The Moon”, a song made famous by the great Ella Fitzgerald, also highlighted Elana’s vocal skills.

Throughout the evening, Zack Sapunor was always a pleasure to watch with an energetic slap technique on upright bass, and listening to his playing you can just see and hear that almost straight line from jazz/swing to Blue Grass to Rock’n’Roll. To be honest, I am not sure that some of the things that Zack Sapunor was doing to that upright bass will even be legal in some states when the band get back home to the USA!

From impressive jazz lines to swing to country, Whit Smith can not only play it all so well, but like the rest of the band, move effortlessly between styles, and Hot Club of Cowtown is this strange meeting place where a country music legend like Bob Wills can meet on stage a gypsy jazz legend like Django Reinhardt and I have this image in my mind of both on stage just enjoying each other’s music.  Maybe this is not a dream too far removed from reality as Django Reinhardt did play with many American musicians including Duke Ellington, Dizzy Gillespie and Louis Armstrong (and others).

There is of course a very “Western Americana” element to the music of The Hot Club and much of this music comes from the 1940s or earlier, so even here in the UK, many of us were probably familiar through many Hollywood films of much of this music too, and songs like “Along the Navajo Trail” and “Hoedown Lowdown” were obviously favourites of many in the audience tonight. Our Hot Club trio are not only gifted interpreters of “Hot Jazz & Western Swing” classics, they are also gifted songwriters in their own rights and often their songs like “Near Mrs” and “Sleep” have their own humour and irony to them.

Although the Queen’s Hall was laid out tonight to a fully seated floor-plan and the audience were hugely appreciative of the Hot Club, they were politely seated throughout, and it was so obvious that this band are more used to people being up on the floor and dancing to their music.  I suspect too that the band are also used to a far wider age demographic than there was here this evening. Still, their obvious enthusiasm and sheer love for playing this music and sharing it with their audiences more than made up for audience “politeness”.

Hot Club of Cowtown will be returning to the UK for future dates, and if you get a chance to see this band live, take the opportunity as they are not only highly skilled musicians, and an incredibly tight band, but maybe more important than that, they are simply full of infectious love and fun for their music.