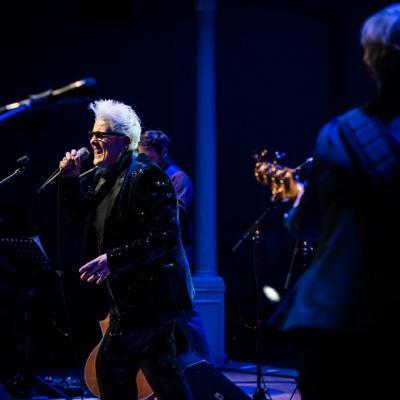 Horse Best in Show was at The Queen’s Hall tonight, and this is the final date in the current tour before Horse and the band head off into the studio to finish the new studio album. Maybe it was the thought of one project finishing and another one starting that was part of the driving force behind tonight’s energy levels onstage, maybe it was that little tinge of sadness at saying goodbye to a live audience for a while mixed in with the pleasure of working with new songs; who really knows, but whatever the reason something a little special was happening  this evening on stage and with the audience too, that little moment of magic between the two that you recognise instantly when you see it.

There is always a very unique connection between Horse and her audience, and that for me is always what makes any show so special. There are few artists out there that I see this connection with and, as always, it was pretty much instant this evening from the moment Horse arrived on stage and the first few opening bars of Shake This Mountain. There is something else happening here though, this is not just an audience that knows and loves these songs, there is always that feeling at any Horse concert that the words of these songs have come to mean so much to so many people in so many different ways over the years. These words have given them comfort, given them hope, perhaps even given some people a voice when they felt they had none of their own. Perhaps these are even words that allow many people to express their own inner feelings and what feelings they have for others around them that they just for some reason cannot find their own words for. Whatever is going on in the world outside, inside at a Horse concert is a little bit like having a warm and comforting security blanket wrapped around you. All of this has created that feeling that you are in a very safe space where no one will ever judge you and will simply accept you for who you are inside of you.

There are so many classic songs in the Horse back catalogue and many of course were here tonight, including “God’s Home Movie”, “The Speed Of The Beat Of My Heart” and of course, “Careful”.  These and many others have not only survived down the years, but if anything become even more popular as new people discover the music for one reason only – they are simply incredibly well-crafted songs and that songwriting partnership of Horse and Angela McAlinden not only stood out in quality from much of the music that was around at the original time of their writing, they still stand out now.  Words are always what pull me into any song (often before the music) and these songs do not have throw away lyrics, they have stories written by a master storyteller of hopes, dreams and emotions. These songs prove that if you do something right the first time round, it stays right forever.

This tour is a celebration of Horse and her music throughout the years, and somehow choices had to be made to a set list that allowed songs from early classic albums such as “The Same Sky” and “God’s Home Movie” to be there alongside the new single and work from the as yet unfinished new album, and everything in between.  That is a lot of music for anyone to have created, and the one thing that is obvious from this show is that the high quality standard set in those early years has never faltered and the new single “Leaving” is a fine addition to this rich musical legacy. There are a few covers of some classic songs in here too with interesting arrangements that work, and as you would expect these songs are from masters of the songwriting art too – Clive Westlake (I Close My Eyes and Count to Ten) and Jimmy Webb (Wichita Lineman).

As always, this was a non-stop display of vocal power from Horse this evening coupled with an easy going on stage performance that looks so easy and natural, but is a gift that few performers actually have. Horse, of course, is not alone on stage on this tour and the band and string trio were never wanting in their performances this evening. As always for me, just listening to Lorna Thomas on bass guitar was a treat too, and Horse and Lorna are such a good musical team upfront on stage.

Opening this show for Horse this evening was The Eves, a Scottish songwriting duo made up of Caroline Gilmour and Marissa Keltie.  It is early days yet for this duo, but already songs like “Not A Love Song”, “Legal High” and the current single “Big Love” are attracting attention from many different sources. For me, The Eves simply need space and time to find that song (either written by them or some of the serious talent level creatives around them at the moment) that puts them perfectly into a creative and performance zone that they can musically call their own, that little bit of magic that will allow them to establish their own clear identity.  This opportunity to not only watch how Horse and the band work on stage is of course a good one, but the chance as songwriters to study just how well-crafted the songs of Horse and Angela McAlinden are is an even greater opportunity.