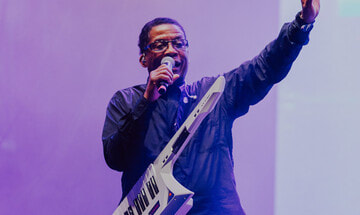 Herbie Hancock made his Edinburgh Internationa Festival 2022 appearance tonight at The Playhouse Theatre to an, as expected, full house and this was a show that obviously pleased the many fans of Herbie and his music who were able to get a ticket for tonight’s show.

You would expect, by default, any band on stage with Herbie Hanckock to be some of the best jazz/funk musicians out there, and this was true of this show, but maybe because Herbie and the band are currently on their European tour, this show just seemed to be very tight musically whilst also feeling free enough to allow everyone on stage to just let their music flow in what often seemed an improvised manner.

How does an artist with the extensive musical back catalogue of Herbie Hancock even begin to choose what music go into the set list for a show?  I have no answer to that question, only Herbie Hancock has, but tonight that started with Herbie in an obviously very relaxed and good humoured mood, chatting away to the audience before beginning “Overture”, which comprised of many musical aspects of his music over the years, some of which were expanded upon later in the evening. There seem to be no musical boundaries in Herbie Hancock’s musical vision, and this overture started with a wonderful exploration of sound, music, tone and colour that would be at home as music in some avant-garde science-fiction film.

Herbie Hancock is obviously the headline star of this tour but, for me, everyone on stage with him is a musical star and keeping an incredible rhythm going all evening that saw him effortlessly move from jazz, to funk, and everything in between, James Genus playing a still not too often seen 7 string bass guitar that over the years has become a bit of a musical trade-mark for him.

On guitar, and making playing a 12 string look so effortless, was Lionel Loueke. This evening, Lionel was also handling some of the vocals with an unexpected venture into scat, and as Herbie pointed out, has the uncanny ability to play and sing in different tempos simultaneously.
Completing our band on stage, was one of the best in the younger wave of jazz musicians out there at the moment, Justin Tyson on drums.

There are so many highlights for me from this show as this is the Herbie Hancock that I wanted to see, not a musician/composer fixed in any musical point, but one who was exploring sounds, rhythms, tempos, and styles with effortless ease as the often perceived boundaries between jazz and funk flowed in and out of each other and so often melted away into one. Herbie Hancock is a composer who obviously understands the all too often overlooked art of leaving spaces in his music too, and that in those spaces there can be either silence or room for something new to emerge depending upon how he, or the band, want to flow at any given moment in time.

One highlight of the evening for many people was the performance of Wayne Shorter’s “Footprints”.  Another huge crowd pleaser was “Come Running to Me” from Herbie’s 1978 “Sunlight Album”. It was interesting to hear how Herbie used the then new vocoder to allow its electronic audio effects to work their magic on his voice, which by his own admission is not a good singing one.

For a large part of this show, Herbie was seated in his “home” between electronic keyboards and grand piano, but perhaps for many people, some of the iconic moment on this show were Herbie Hancock walking around on-stage with his white electric keyboard/guitar and playing “Chameleon”.

This show was about a lot more than just music though, and if you took time to listen to the words of Herbie Hancock as well as his music, there is obviously a man here who cares deeply about the world around him and that only the single/one family of humanity will get us out of the environmental mess that the earth is currently in, only this family will have the answer to all the other challenges that we face in the 21st century.  To do this, however, this family must unite together in a common goal.  A message just as important as any music from Herbie Hancock.