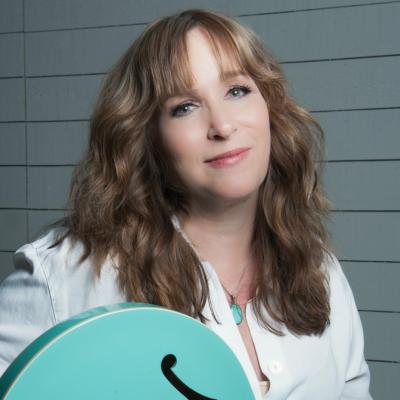 Gretchen Peters made a more than welcome return to the Queen’s Hall Edinburgh tonight and from the moment she walked on stage with pianist Barry Walsh, it was obvious that this re-scheduled concert was a happy reunion as much for Gretchen as it was for her audience.
The set opened with two very unique lyric lines

These words from “The Show” (from the 2018 album Dancing With The Beast) are typical of the often unexpected way that Gretchen Peters uses language to great effect in her songs to tell wonderful stories of often great emotion and power, as a writer with the rare ability to almost paint those stories into pictures using words and music.

As always Gretchen’s songs can often have that element of darkness to them and it seems that, like many other writers, Gretchen is often drawn to explore the darker emotions of the human psyche, and more than a few of the opening songs, including “Blackbirds” and “Wichita” are murder ballads, and that is a song writing tradition that we are very familiar with in Scotland.

Many of Gretchen’s songs are written from a very female perspective of life and the insights and stories that seem to endlessly flow into her work make it very clear that here a master of weaving words and worlds is at work.  On the set list tonight was the wonderfully written “Five Minutes”, and if there are any budding songwriters out there reading this review then just study this song, look at its words, listen to its music and you will find out more about how to write a song in “Five Minutes” than you will probably do anywhere else.

Gretchen Peters interests me as a songwriter for many reasons, and one of those is the sheer range of her songwriting ability, and the songs performed tonight gave us a small insight into these gifts as we had the instantly recognisable “When You Love Someone” (co-written with Bryan Adams) to the almost heartbreakingly touching words of “When You Are Old”.  With other much loved songs from her back catalogue, including “Say Grace” and “On a Bus to St Cloud” this show was obviously Gretchen Peters giving her audience exactly the songs that they wanted to hear, and the standing ovation at the end of this evening said it all.

Opening this show for Gretchen, and providing backing vocals at times on her main set, was her long-time friend, singer-songwriter Kim Richey.  Sadly, limited time only allowed us to have a few songs from Kim, but “Come Around”, “Pin a Rose On Me” and a cover of the Kris Kristofferson classic “Sunday Morning Coming Down” let us all know without doubt that here was a writer and performer of considerable talents.