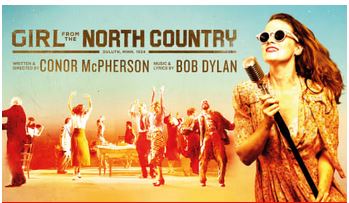 Girl From The North Country is at the Playhouse Theatre Edinburgh this week (Tue 18 Oct - Sat 22 Oct), and if tickets are still available, then try and get one as this is one of the most emotionally powerful works to come onto any theatre stage in a long time.

Set in 1934 in the farming heartland of America, this is the story of a family just about to lose everything to the bank that is soon to be foreclosing on their loan and the implications that this has not only for them, but the people now staying in their farmhouse come guesthouse. Here the winds of fate seem to have cast together very different people whose lives have also been upturned by the crisis of an economic depression and other factors. Here in the one room of this guesthouse, where all of the story unfolds, is the place it seems where hopes and dreams come to finally die, a place where people will, forced by circumstances beyond their control, make choices that not too long ago would have been unthinkable to them.

Girl From The North Country is a story of people as they and their stories interweave almost seamlessly in and out of one another and, bringing all of this together,are two great users of the written and spoken word – writer and director Conor McPherson and Bob Dylan’s music and lyrics.

Conor McPherson is one of those rare writers who have the ability to create real characters from his words and give them real depth, emotions and perhaps even for a short time, souls. He has that ability to weave a story that, like this one, will pull you so completely into that world that you feel like you are in that room on stage watching and listening, a little bit like a fly on the wall, and somehow that sense that you are in a large theatre just dissolves.  So deftly crafted is this script that you begin to actually care about the characters created and you want to hear the next word in everyone’s story.

The words and music of Bob Dylan need no introduction, but if you are perhaps expecting some sort of “musical juke-box”, then forget it.  Here, Conor McPherson has not only re-imagined the twenty songs used in this production, but he has also chosen these songs with great care and woven them seamlessly into his story. Some of these songs such as “Like a Rolling Stone” and “Forever Young” will be known to so many people, but many of the songs used here might be a surprise to even the most devoted of Bob Dylan fans.  A very clever use of “Hurricane” also allows the story of boxer Rubin Carter to be transported back in time to form the basis of another character’s story, boxer Joe Scott (Joshua C Jackson). With the words of these songs we are also get a clear understanding of just how special a writer Bob Dylan is and how so often in just a few lines he can capture the essence of the people in his stories.

The story and the music are brought to life by the combination of a subtly lit live band on stage and also, when needed, by some of the principal performers and the result is often an impressive display of both dramatic and musical performance skills.

There are no weak performances here at all as the story is narrated by Dr. Walker (Chris McHallem), physician to the Laine family – Elizabeth Laine (Frances McNamee), Nick Laine (Colin Connor), Gene Laine – son (Gregor Milne) and Marianne Laine – “adopted daughter” (Justina Kehinde).  Everyone mentioned here was on top performance for this show, as was Mrs Nielsen (Keisha Amponsa Banson) whose story weaves in and out of the lives of the Laine family.

Special mention has to go to an impressive and emotionally powerful performance of Elizabeth Laine by Frances McNamee. Somehow, Frances gets that portrayal of a woman who has for many years now slipped into her own world of reality due to a mental breakdown at times heartbreakingly poignent. Still though, there are times when Elizabeth Laine sees with more clarity not only the people around her, but everyone’s own desperate situation, including her own. Elizabeth often sees through the secrets and the lies of everyone around her.  If there is any justice out there in theatre land, Frances McNamee will be collecting a lot of awards for her portrayal of Elizabeth Laine.

To make things even more interesting, we do get resolutions to many people’s stories here at the end, but some stories are never really told, we never find out for example why Nick Laine considers himself incapable of ever loving everyone. Conor McPherson is a gifted enough writer to understand here that not all stories need to be told, that some stories, some secrets need to be hinted at, but still need to be kept silent.

The illusion of a real world for the story of everyone in this room to unfold is created by very good set design and clever use of lighting design. Here both, particularly the lighting which is often minimal, are as much a part of this story as any words or performance on stage.

With Conor McPherson’s script we are all reminded that the building blocks for any theatre of any merit are two simple things – inspired words and a gifted cast of performers to bring those words and the stories and people in them to real life.  Girl From The North Country has both in abundance.