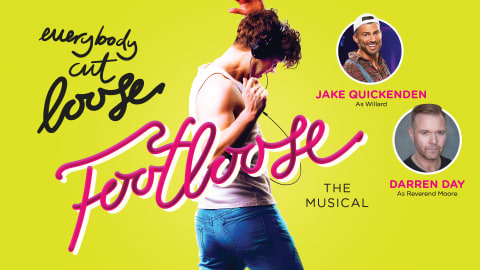 Footloose is at Playhouse Edinburgh this week (Tue 19 to Sat 23 July), and if you want to just sit back, listen to some hit songs of the 1980s being performed live on stage, and just chill out for the evening, and there is nothing wrong with that, then this could be the show for you.

If, however, you want your musical theatre to have something more to it, then Footloose is perhaps an apt name for this show as this production, for me, desperately needs a guiding hand in where those footsteps are going.

The biggest problem is one that no one in the cast can fix, and that is that Footloose is showing its age now. The original film was made in 1984, and the stage show has been around since 1998. Even a 2011 re-make of the original film (which accounts for so many younger people in the audience tonight) cannot hide how poorly this film/show has aged over the years and it will take more than a lacklustre attempt at beatbox/rap music to give this show the update that it so desperately needs.

Every time I go to see this show I hope that someone has been brave enough to give it the major overhaul that it needs for a contemporary theatre audience, but that never seems to happen, and certainly did not happen here. I can understand the need to keep the core of the show close to the spirit of the film at least, and there are probably many legal licensing reasons for this too, but despite there being several real stories of interest here, none are ever fully explored and what is left all too often are shallow stereotypes of characters that give our cast very little to work with no matter how hard they may try.

Footloose is always an odd stage musical for me and having the title song of the show right at the very beginning of it always seems an odd move. There are of course some other big hit songs from the film here and “Holding Out For A Hero” and Let’s Hear it For The Boy” were obviously crowd pleasers for all ages this evening.

The story of a rebellious teenager, moving from the big city to a small town and meeting small town girl whilst also challenging the authority of the town was not a new one for Footloose, it had been done many times before and has been done many times since, but somehow here, that story of Ren McCormack and Ariel Moore managed to capture a perfect moment in time for many people in 1984 and a little of that moment has obviously stayed with many people for many years. In this show Joshua Hawkins and Lucy Munden have the task of trying to re-capture that magical moment for many in the audience (original and remake films) and for the most part they both do it well within the confines of their limited on stage personas.

An obvious problem always with Footloose is that, although this is at its heart a story of teenage rebellion, it is also a story of two people finding out that their own personal loss in life gives them a common bond, but we never really get the chance or the time to open up this story and explore just what is happening in their lives. In fact, their story is so often eclipsed in this production and Ren (Joshua Hawkins) is not even given the main star status here, these go to his friend Willard Hewitt (Jake Quickenden) and Ariel’s preacher father, Rev. Shaw Moore (Darren Day).  Again both Jake and Darren do the best they can with their respective roles, but their opportunities are so limited.  Interestingly, the relationship between Rev. Shaw and his wife Vi Moore (Holly Ashton) starts to offer real potential to overshadow the main story, but again we only skim across the surface of it. Other characters and their interaction with one another always seem to be distracting you from the main story lines too.

Production costs are an obvious area that any touring stage show has to look after, but here, all too often the potential of what a large performance space like The Playhouse stage can offer a show were simply under-utilised.

Footloose also seems to have a bit of a problem as to who exactly it is targeting the show for, as the age group spread going to this show is a large one from people that will have seen the original movie through to young children, and at times some of the show content does not fit in with this profile.

In the end though, as I said at the beginning of this review, Footloose is what it is, a fun night out for many people and many people in the audience were obviously having a very good time at this show tonight.