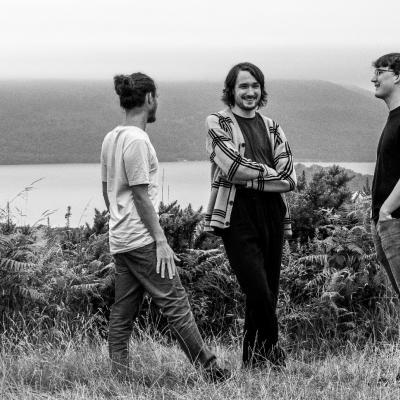 Please note that unless requested by performers/pr/venues that this website no longer uses  the "star rating" system on reviews.
Fergus McCreadie was at The Queen’s Hall Edinburgh tonight with David Bowden (Bass) and Stephen Henderson (Drums), (aka The Fergus McCreadie Trio) to launch his third album Forest Floor which was released today on CD, Vinyl and download formats.

As with the previous two albums, Cairn and Turas, Fergus is taking much of his inspiration from the landscape around him and this is translated into his compositions often as an emotional response to the sounds, textures and at times the very elements that surround him on his travels. The end result is often something that blends traditional jazz structures in with far older traditional/Celtic sounds that give this trio a distinctive sound that separates them from many of their contemporaries.

This evening is an album launch, so I am giving no set list secrets away here in telling you that the majority of the music came from the new album as Fergus opened with Law Hill (the first single from the album) and The Unfurrowed Field, and both played in one continuous performance of around 30 minutes.  Both however are very different in their compositional feel and “atmosphere”.

Nature, the elements and the landscape itself are playing pivotal roles in the creation of the music for this album and these ever changing facets of the world around us are reflected in the music to, at times, surprising effect, but as always, there are personal favourites here, and for me these were “Morning Moon” and “The Ridge” as I can easily relate to them personally from my own experiences.

There is something about darkness and a moon above on the landscape in the early hours of the morning, and moonlight can be soft and almost magical in a way that the direct sun never captures; perhaps it is because the moon is only ever reflected light, and this changes the way a landscape looks completely from what is to come a few hours later when the sun rises in the sky. Once again Fergus somehow captures a little of this “mystery” in “Morning Moon”.

Anyone who has ever walked along (or run along) a hill or ridge when the mist is down will know exactly where Fergus is going musically with “The Ridge”. Something strange happens when the mist is all around you and visibility is only a few feet in either direction; you know the larger world is there, but you are shut off from it both visually and often by the sound of everything around you being muted.  Getting a little insight from Fergus about how this translated for him into music was interesting.

Also performed this evening was “Cairn” the title track from the last album, and due to Covid restrictions it was not possible for a launch event to be held for that album, so nice to hear this one performed live.

Fergus McCreadie is a special talent on piano/keyboards, but credit also needs to be given this evening (as always) to the other members of The Fergus McCreadie Trio - David Bowden (Bass) and Stephen Henderson (Drums).

Fergus McCreadie is a young and impressive talent on the Jazz scene at the moment and he is clearly taking his music in his own directions and not relying upon re-playing known jazz standards.  I hope for Fergus that this allows him to attract a new and younger audience to his concerts as this is much in need across the whole Jazz music spectrum.

Leaving this performance tonight, I wonder where the next road might be for Fergus musically, but perhaps one direction is film scores as his music often seems suited to this medium.