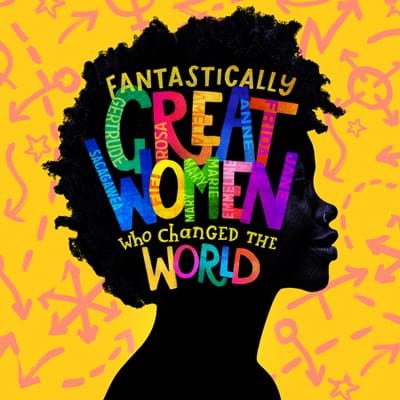 On paper this production should have everything going for it. Book author Kate is a distant relative of women’s rights activist/pioneer Emmeline Pankhurst, and the creative team behind this show, including Amy Hodge (director), Chris Bush (stage adaptation) and Miranda Cooper (music and lyrics) have so much experience and expertise in their respective fields. Add into this creative Kenny Wax (producer), who is also the producer behind many “Mischief Theatre” productions, the now hugely succesful “Six”, and many other high profile stage productions, then I was expecting something a little special tonight from everyone.  What I got was a theatrical experience as far removed from this as it was possible for me to get.

I am trying to take into account two very important things when writing this review, and that is that I am far outside the targeted demographic of both the book and the stage show; I am not school aged, and I am not female.  Having said this though, I have to say that although some of the names of our “heroes” were new to me, some of them were not. In fact many were women who have interested me for a very long time for their interesting lives and great personal achievements, and I am fully aware of how simply being a woman put many discriminatory obstacles in not only their way, but every woman’s way.  In the end though I view their achievements, and often great contributions to the world, as the work of great people, great human beings and I have never distinguished this in my mind by gender.

Along the production path between book and stage, the decision was made to keep the illustrative and very cartoon-like style of the book when designing the stage costumes, and I can see the sense in that as it may obviously resonate strongly with readers of the book, and it certainly creates a very distinctive visual style for our cast.  The idea to have a young girl literally lost on a school trip and straying into an exhibition space where she gets advice from some great women of the past is interesting and as a narrative vehicle constantly moves this story, and the “Great Women’s” stories along and Elise Zavou as the lost girl, Jade, gives a solid performance, made more impressive by the fact that she stepped in literally at the last minute in place of Kudzai Mangombe.  All of the cast of “Great Women” – Jade Kennedy, Renee Lamb, Kirstie Skivington and Christina Modestou play multiple roles here, but all of them are mostly in the same format, and although the books obviously work in their illustrative style, the transfer to stage is not working for me. Whether or not it is working for a younger, and intended audience I don’t know, but the relentless “pop video” presentation of the songs and much of the story, obviously takes many influences from “Six”, but it is not working well here. None of this is really anything to do with the performance cast, they are obviously working as directed here, but the format allows for little individuality or essence of the original women to come through here, and the depiction of Emmeline Pankhurst as little more than a brightly coloured soldier in combat fatigues shouting out constantly just did not work for me on any level at all. Surely this great woman filled with so much courage and determination in her life was so much more than this cartoon representation?

I have many issues with this production, but top of the list are a few. First is the idea that somehow if you are young and at school then you have to be given facts in the format of this show, and I happen to think our young people are far smarter than that. Secondly, but perhaps most importantly for me, this show was for me a missed opportunity to celebrate the lives of these great women and breathe new life into their stories, and an endless stream of forgettable songs and dance routines in  “pop video” style of this show actually for me reduced our “Great Women” all too often to sound-bite trivialities and visual cartoons, and that actually made me feel very sad all too often during this show.  Are we not allowed for example to know from whom Anne Frank was hiding for years while she wrote in her diary? The only saving grace for the stories was that of Rosa Parks.

There is of course a far wider issue here, and this show is part of a far bigger problem. We live now in a world of endless merchandising, and so many of our heroes, including many of the ones in our story tonight, have seen their great lives and achievements reduced to nothing more than an image on whatever someone will pay for. As we know from this show, Rosa Parks is on a tea-towel in our young girl’s kitchen at home, her image now merchandised like Mickey Mouse, Star Wars, Star Trek, or whatever, the list is endless.  Is this the way we should be remembering the great people who contributed so much to this world?

This production seemed to have problems from the very start as after one opening number our show was stopped for nearly 30 minutes and an still unexplained (as noted) cast substitution made. All of this was communicated to the audience in, for me, a very amateur way, including an initial on stage announcement which most people could not hear at all, resulting in many people shouting back “we can’t hear you”.  Gremlins happen on live stage productions, I accept that, but you have to deal with them a lot better than this.