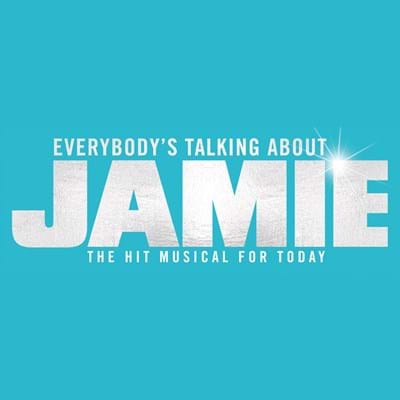 Everybody’s Talking About Jamie is at the Festival Theatre Edinburgh this week (Tue 29 Mar to Sat 02 Apr), and if there ever is proof needed that there can be magic in this world, and that dreams can come true, then this show is it. Somehow a television documentary about the coming of age story about young Jamie Campbell wanting to wear a dress to his school prom night was seen by the right person and soon others with the power to make theatrical magic happen had not only brought this story to the stage, but to the West End stage in an almost unheard of short time period.  The magic did not stop there and a successful feature film was also made based on Jamie’s story.

Some people say that everyone has their own individual space on this planet, but the trouble is that most of us don’t know where that space is. Some people eventually find that space, but many more live a lifetime without ever finding it.  Jamie Campbell was different; from a very young age he knew where his space was and what he wanted to be in that space - a drag queen.

Choosing to stand out from the crowd for whatever reason is never an easy path to follow, particularly when you are young, and when the world around you is so full of negatives and outright prejudice, it  takes a person of special resolve and resilience to weather the storms and keep to the path of their dreams, and this is really what this show is about, to follow your own dreams no matter what the odds against you.

Everybody’s Talking About Jamie is at its heart an upbeat theatrical musical celebration of the individual, and individual dreams, and Layton Williams as Jamie New stamps his authority on this show from the moment he walks onto the stage, and like Dorothy in the Wizard of Oz, from the moment he puts his “special shoes” on, a little bit of magic really does happen on stage as he sings, dances and struts around in true diva fashion. A lot of this magic is of course helped by the fact that this show has some of the best original music written for any stage show in a long time, and all of the main characters have songs that clearly identify their very individual personas.

In this show, the story really starts to gain pace when Jamie goes in search of his prom dress and meets shop owner Hugo, formerly known to many as the drag queen superstar Coco Chanelle. This part should have been performed by Shane Ritchie but, due to illness, understudy Rhys Taylor filled that role tonight and brought his own take to the role with him, and in the process smoothed some of the sharp edges off the persona that I expected Hugo to have. This softness worked well for many scenes with Jamie.

This is, for me, a bit of an odd story/production as although it is Jamie’s story and Layton Williams, like Madonna, “Vogues” his presence all over this stage, the real story and the real star of this show is Jamie’s mother, and Amy Ellen Richardson is outstanding in this role, and for me has the song of the show – “He’s My Boy”.  This song is simply one of the best to come out of musical theatre in many years and Amy’s performance of it got all the applause from the audience that it deserved.  I say that this show belongs to Jamie’s mother because this is a story of a mother loving her son enough to not only always be there for him, but to always allow him to be just who he wants to be and fight for and protect the space in this world that he knows is eventually going to be his.  All of the strength and resilience that Jamie shows in this production comes from his mother.

Jamie is an interesting show on many levels and how it deals with cultural identity and diversity is just as important as Jamie’s story, and the sensitive handling of Pritti Pashi (Sharon Phull) proves that when writers take the time to explore people and not stereotypes, real stories can start to be told.

Wisely, the upbeat and feel-good factor required for a stage musical is always kept in this production, but I suspect if there was ever a stage drama written about this story that it would be far darker in nature as the real Jamie’s story was obviously not all one of singing and dancing smiles and adulation. We do get glimpses of that darker story and that very emotional journey in this production, but the bright, feel good, slightly sugar-coated ending negated, perhaps wisely, much of that darkness.