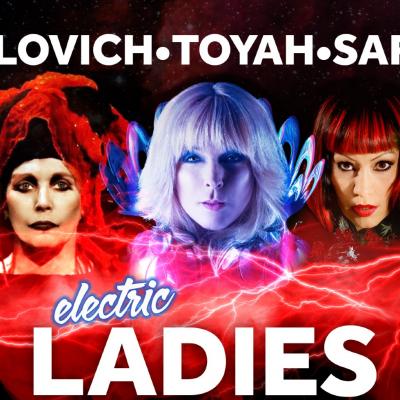 Electric Ladies (electric ladies of the 80s) at the Queen’s Hall tonight was, like many other shows at the moment, a re-scheduled one, but people obviously held onto their tickets as the venue was pretty full, and on a Monday evening, that is never an easy thing for any show to do.

The dates are, however, not the only things that have been re-scheduled for this tour. The original line-up of Toyah, Lene Lovich and Hazel O’Connor has also been changed with Saffron from 90s indie-rock band Republica taking the place of Hazel O’Connor who is recovering from a bleed to the brain earlier in the year. This tour is now in support of Hazel and her hopeful full recovery.

Opening the show this evening was Lene Lovich and although I so strongly remember “Lucky Number”, I had forgotten some of the other hits – songs such as “I Think We’re Alone Now”, “Say When”, “Angels” and “New Toy”.  Perhaps the reason for this is, at the time, Lene Lovich was always a bit of an acquired musical taste, and I just never acquired that taste.  Still, it was nice to hear that driving beat of New Wave/Punk again on many of these songs and many in the audience were obviously loving their trip back in musical time.  What is important here is that Lene Lovich is still on stage (and hopefully off stage too) obviously living to those core punk ideals of the time – never conforming to what society expects you to do, and always walking your own pathways.

With the unfortunate absence of Hazel O’Connor on stage, Toyah was obviously now leading the musical charge for the evening, and it is at times all too easy to forget just how successful Toyah was in the 1980s with albums such as “Sheep Farming in Barnet”, “Anthem” and “The Changeling”. The last mentioned album was perhaps more important than anyone realised at the time because Toyah is truly one of music’s “Changelings”, always adapting her music. This ability to change creatively as an artist has allowed Toyah to move her music and her career outside of her original New Wave start up years (something many of her contemporaries were unable to do) and continue to make new music and release new albums and singles throughout the decades right up until her new 2021 album “Posh Pop”.

From the first few moments on stage this evening, Toyah obviously had the audience with her and this is where you get to see that edge that many years of on-stage performance skills can give an artist as hits including “Thunder In The Mountains”, “Echo Beach” and of course “It’s a Mystery” obviously brought back many good memories for many people tonight.

In place of Hazel O’Connor was Saffron, who by her own admission was living her own “fan-girl” moment come true on this tour. I have to admit that at the time, Republica just passed me by in the 1990s as I was looking in other musical directions at the time. That was, with hindsight, maybe a mistake as I obviously missed some really good songs – “Drop Dead Gorgeous” and “Ready to Go” being only two of them. It was good to watch Saffron still keeping that ‘90s indie rock sound very much alive this evening and giving Hazel O’Connor’s classic “Eighth Day” a little bit of that edgier feel to it as well. One of the highlights of the evening for many people was Saffron’s duet with Toyah on the Hazel O’Connor song “Will You”.

For anyone with an interest in 1980s music (not only those that were there) this show was a warm Edinburgh evening’s walk down memory lane, but one also tinged with a little bit of sadness that Hazel O’Connor was unable to be on stage for this tour.  I am sure that, like myself, everyone in the audience this evening is wishing Hazel O’Connor a good and speedy recovery.