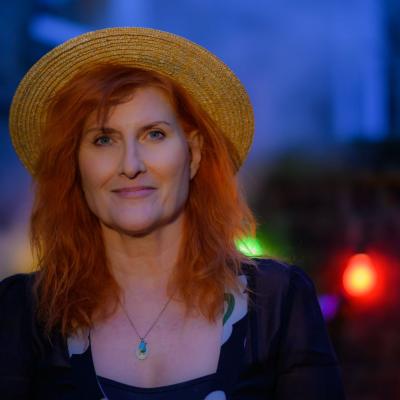 Eddi Reader stopped off at The Queen’s Hall Edinburgh tonight as part of her '40 Years Live' concert tour and, as you would expect, the venue was pretty packed with people who have over those years taken Eddi Reader and her music into their hearts. Perhaps it is even more than that, Eddi Reader has become more of a friend to them than an on-stage performer and, in return, you always get this feeling at one of her concerts that Eddi Reader too is at home with friends, and few performers ever get to have that rare connection with their audience.

The enforced time-off stage of the past few years have been difficult ones for all performing artists, and Eddi was obviously enjoying every moment of being back on stage and performing to a live audience again.  That feeling was also obviously shared with the band too, and John Douglas, Kevin McGuire, Alan Kelly and  Boo Hewerdine,  plus of course Eddi made this a special evening for many people.

Edinburgh has some historic connections with Robert Burns including the grave of “Clarinda”, Agnes McLehose, known as Nancy to her friends, in Canongate Kirkyard. The Queen’s Hall is in Edinburgh’s Southside and very close to the venue there also other major connections to Robert Burns, Jean Lorimer (Chloris) is buried in East Preston Street Burial Ground and it is also only a few streets away from here that the poet met a young Walter Scott.  Over the years, Eddi Reader has built a solid reputation for her performances of Robert Burns songs, so it was only appropriate that the opening song tonight was “A Red, Red Rose”.  Other Robert Burns songs of course followed later in the show.

If you have the back-catalogue of work both as a collaborative and solo artist that Eddi Reader has, where do you start when selecting material for a 40th anniversary tour? Only one person (Eddi) has the answer to that question, but the selection of songs performed tonight certainly all proved to be well received by the audience, and the early years with Fairground Attraction were well represented with “Find My Love”, “Fairground Attraction” and of course “Perfect”.  These are, like all good songs, ones that have survived in popularity through the years and if anything become even more popular than they were first time around. A big part of that success is of course Eddi Reader’s vocal talents; another reason is of course that Mark Nevin (also with Fairground Attraction) is a very gifted songwriter.

There have been so many songs over the years from Eddi Reader, and many of them have hopes, dreams and a little bit of nostalgia woven throughout them. Some are observational, but some have very personal meaning to Eddi, and perhaps one of the best, and certainly one of the most beautifully written is “My Favourite Dress” and maybe spending your final years being young again (in your own mind at least) and walking down Argyll Street, looking amazing in your favourite electric blue dress, turning everyone’s head along the street, is not a bad way to go.

Music, family, friends and songs are interwoven into the DNA of Eddi Reader and it is obvious in a show like this that all of these things provide not only warmth and comfort to her, but also an unbroken connection to the past and all those people who were there with her at the very beginning in that family home in Glasgow. It is with memories of obvious love and affection that Eddi Reader re-creates some of those moments and introduces us to her mother, father, and many aunts and uncles throughout the evening.

We all at some time or another wonder where people go, where we go once we leave these mortal bodies, and I think the answer is that if we are lucky, we go into the hearts and minds of those we loved in this life, and if they continue to tell our stories and sing our songs, pass them onto someone else who hopefully passes them on again then we never truly die. Eddi Reader is never really alone on stage, part of her is always, I think, still singing in that family home, listening to her people’s songs and stories, and if you are lucky and catch just the right light, sometimes you will catch glimpses of them and hear their songs and stories too.

Opening the show this evening (and on this tour) was Irish singer/songwriter Ultan Conlon, and like Eddi Reader he also has that gentle connection with people that puts an audience completely at ease.  There is also, in his songs, more than a hint of nostalgia for the people and the landscape of Ireland.

Ultan has a style of writing that often reminded me of the sounds of the early 1960s when many folk/traditional musicians were getting wider public attention and taking their inspiration from the songs of yesterday to create their own songs for their times, and there are some well-crafted songs here, one, “Really Gone” even catching the attention of John Martyn.  Every songwriter needs a little unexpected boost in their career, and for Ultan that recent boost came via unexpected success with the nostalgic novelty song “Penny Sweets”.  Some of us though are old enough to remember when these pennies were old imperial money ones and not decimal. We also remember getting four sweets to a penny if you chose the right ones.  Ultan has of course written far more songs than these two in his 20 plus years as a songwriter/performer and there was only time for a few here.

Like many Irish people, Ultan obviously loves to tell a story, and those stories are part of not only his music but that gentle and endearing charm, humour and connection that he has with his audience.  It is appropriate that Ultan be with Eddi Reader on this tour as these are all qualities that Eddi shares with her audiences too whenever she performs.