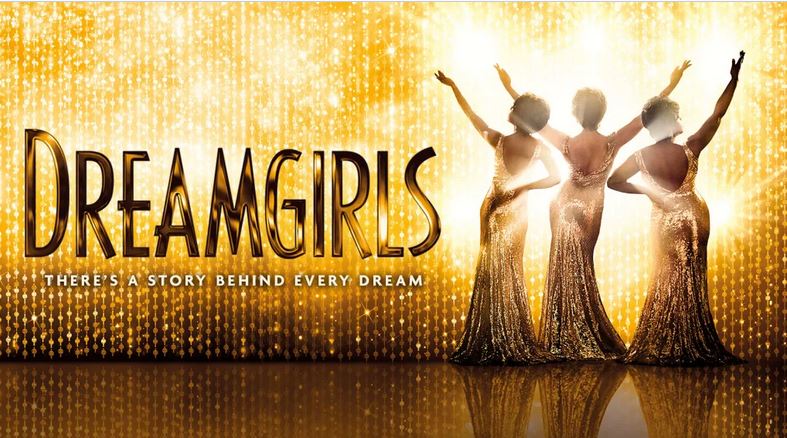 Dreamgirls is at The Playhouse Theatre Edinburgh from Tue 5 to Sat 16 April and whether or not you have any interest in soul music is honestly not that relevant as this show is simply a modern classic of musical theatre with a solid story line and some very good original songs.  Dreamgirls may have originally taken to the stage in 1981, but the show has aged well and the musical period and style that it covers is timeless.

The Dreamgirls, Effie White (Nicole Raquel Dennis), Lorrell Robinson (Paige Peddie) and Deena Jones (Natalie Kassanga) aka The Dreams are three young and talented singers with big dreams of being music stars and soon they meet their manager-to-be Curtis Taylor Jr (Dom Hartley-Harris) who sees in them not only their chance of real success, but also his.  Also chasing his dream as a songwriter is Effie’s brother C C White (Shem Omari James).

Times are changing in the R&B music industry and their new manager knows that to be a true success in the current music market, any black artist acts must somehow make the transition from the racially segregated record industry and cross over into the white mainstream pop charts.  This move of course brings immediate conflict with established managers like Marty (Jo Servi) and established recording and touring circuit stars, and in this show, that is Jimmy Early (Brandon Lee Sears).

Dreamgirls is at times a bit of an odd show as it is not as some people think a slightly altered story of Motown music and in particular the Supremes, but more of a dream of every one of the girls in groups of the day – The Chiffons, The Marvelettes, The Velvelletes, to name but a few.  There are moments, however, when the story line touches a little bit close to The Supremes story, but obviously still far enough away as to not cause any legal problems for the show. Like me, you might also spend the night thinking who a character could be alluding to, is R&B star Jimmy Early maybe James Brown, is manager Curtis Taylor Jr maybe Berry Gordy Jr?  Of course the answers to questions like this we will never know and in truth we are all probably seeing many different people in these roles and, very probably, none of us is right in the end.

This is a show that has had a lot of care and attention to the details taken care of, and that is obvious from the moment the show takes to the stage.  The music and the songs are new to this show, but the writers (music by Henry Krieger and lyrics by Tom Eyen) have somehow managed to capture the essence of many of those classic R&B/Soul songs from the early 1960s onwards and distilled them in to a musical narrative. The book for this production was also by Tom Eyen. There are no lazy copies here, but if you listen closely to the arrangements there are some classic period phrases in some of these songs and you just might spend a lot of the evening trying to figure out what song they are from.  I need to be clear here, the writers have not taken anything, it is just that so many musical phrases, so many little sections of music, are simply common to so many R&B/soul songs of this period and there is no escaping that fact if you are trying to re-create the sound and feel of the times.  Close attention to period fashions and dance styles also mark this show out as a little bit special from many other retro music style productions touring at the moment

There are touched upon here many issues of the time for black recording artists/songwriters and the biggest one is of course very limited distribution and radio airplay coupled with the fact that so many great songs of the 60s (even earlier 20s to 50s) were covered by white recording artists who had the huge chart success with them - think Big Mama Thornton and Heartbreak Hotel/Hound Dog and Elvis Presley. To make matters even worse, the songs were often watered down versions of the original with changes to the lyrics common place. In this show, that “stolen” song is “Cadillac Car”

What makes Dreamgirls a true musical stage show is not just the music but the fact that we have here backgrounds stories of real depth that allow real emotional interplay between our main characters to open up. This is at its heart stories of boy meets girl, boy loses girl/girl loses boy and also at its core a very moral story of knowing the difference between right and wrong, valuing what is of real value in your life and ultimately not realising what you have and what your dreams actually were until you face losing everything of real importance in your life.

I have deliberately not singled out any of our main cast here for their performances as that is simply unfair in a show like this.  Everyone here is on stage because they are simply very good at what they do and that is reflected in every performance over some great songs that require performers who understand how to put emotion into a vocal performance to bring them to life, and every song is brought to life in this show.