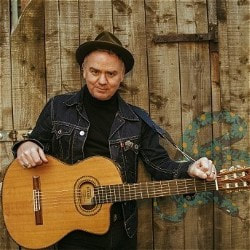 Dean Owens From Leith To Tucson at Pleasance at EICC Lammermuir Theatre was a welcome return not only to Dean at The Edinburgh Festival Fringe, but a stripped back set from Dean and some songs old and new along the way.

This was the second of two shows from Dean (the first was last night) and within the short space of roughly an hour for this Fringe show we got a small selection of some of the songs that have taken Dean Owens from his home town of Leith to recording in Nashville, the deserts of New Mexico, and as the name of this show tells us Tucson.

If you have not heard of Dean Owens, then you have been missing out on one of the best singer songwriters that Scotland has produced in many years, and his output of songs over some eight albums and many other musical projects and musical collaborations have resulted in a body of work that few contemporary artists out there can boast of.  Distilling all of this music down to one show, particularly this one where time is so limited, was always going to be problematic, but the format of the show was pretty loose with some songs that were set and others that were audience choice, and to do a show like that you have to be very confident of both your own abilities as a performer on-stage and your own songs. On both these matters, Dean Owens has no problems.

Anyone who has known Dean Owens and his music over the years will know that many of his songs (as he said so himself this evening) can range from melancholy to miserable, and this is true as he has a talent for tapping into the darker emotions of our lives. Having said that, Dean Owens himself has a very sharp sense of humour on stage that is often at odds with the stories of his songs.

Usually Dean Owens likes to talk to his audience, tell them the history behind a song, chat with them, and is known for pretty long sets. Tonight, a Fringe show format made that impossible, and in a way that was good as it forced Dean to concentrate on getting as many songs as possible into this set.  It was good to see and hear these again within this Dean Owens solo show format, and Dean and his three guitars were all obviously happy to be away from the online concert days of Covid restrictions and back in front of a live audience.

There were some classic songs here from Dean’s back catalogue, many of them interweaving stories of his own life, his family and friends, and behind an often easy going Americana rhythm there are some wonderful stories of real emotions and, at times, personal honesty that few songwriters seem to be able to create.  Some old favourites of mine were here, and in no particular order or preference it was good to hear songs such as “My Town”, “Up On The Hill”, “Raining In Glasgow” and the very cleverly written “The Night Johnny Cash Played San Quentin”.

Dean Owens has written a lot, toured many countries, worked with many musical collaborators over the years, and some of the newer material reflected some of this - “Ghosts of Wild Horses” (from the Buffalo Blood project) and “Land of the Hummingbird” from the new album “Sinners Shrine”.  Ending the set this evening was “Southern Wind” (from the album Southern Wind) which won Dean the 2019 UK Song of the Year at the Americana Music Association UK.

No matter what the song may be from Dean Owens, it is always underpinned by a story that we all can relate to in some way or another, (even if it is an instrumental), but the biggest story of all is perhaps in the title of this show, the story of how a boy from Leith got to one day take his music to so many people and so many places in this world – “Dean Owens From Leith To Tucson” is an apt one indeed.

If you want to hear more songs from Dean Owens with a wider musical soundscape to them, then put his one night show with his band the Sinners at the EICC on 18th August into your diary.