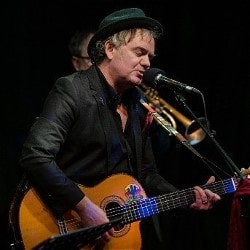 Dean Owens and The Sinners at Pleasance at EICC Lomond Theatre was a one-off Edinburgh Festival Fringe performance that gave us all this evening a chance to hear much of the music from Dean’s latest album “Sinner’s Shrine” performed live.

This show is really a follow up one to Dean’s two earlier one-man show dates this week at EICC – “From Leith To Tucson”, and this show is where that path has led him to date, recording Sinner’s Shrine in Tucson. This project also saw Dean once again working with musicians from the band Calexico.

If you have not yet heard the music of Sinner’s Shrine then try to imagine that somehow, this “Man from Leith” has been transported to New Mexico, or maybe somehow found himself on the set of a Sergio Leone western with an Ennio Morricone soundtrack playing. All of these musical flavours seem to have somehow found their way into Dean’s music, but if you listen closely to many of these songs tonight, these elements have always been there in Dean’s often Americana sounding music, it is just that their physical geography and sounds have expanded.

Leith, Tucson, Nashville, New Mexico, the physical location really does not matter that much in Dean’s songs as, yes, the musical influences may change, but underneath everything is his skill as a songwriter and, if anything, these new songs prove that in Leith or in Tucson, melancholy and misery are exactly the same, a part of being human that is global. Dean Owens has an ability to write songs full of stories and emotions that we can all relate to in one way or another wherever we happen to be in both a physical location and in our own lives.

Some of these new songs are capturing the essence of the landscape that has so inspired this album, others have a very clear statement to make, or a story to tell, but whether it be songs like  “Arizona”, “The Hopeless Ghosts”, “New Mexico”  or “The Barbed Wire's Still Weeping” performed live (amongst others) there is a clearly a far larger landscape and story that Dean Owens is creating here with his music and the Sinner’s Shrine album gives us his complete musical vision for this project. One interesting song performed here was “After The Rain” as this is a new arrangement of an older song of Dean’s and it is surprising how easily this song transposes into this new music, proving perhaps that “Sinner’s Shrine” has been waiting to get out of Dean Owens for a long time now.

If this new music of Sinner’s Shrine has one problem (if you want to call it that), it is that re-creating the complex music and production layers of the album live and also touring with the original musicians is just not practical (or economical), particularly for a one night Fringe show, so trade-offs always have to be made to present the music as closely as possible to the album, and Dean and The Sinners do a very good job of this live.

There were of course some older songs from Dean Owens tonight, including the very personal to him “Baby Fireworks”.  We also got the chance to hear some new music from Kirsten Adamson, singer-songwriter and “Sinner” for the evening. There were some interesting songs here from an album that will be released next February, which Dean is also producing.