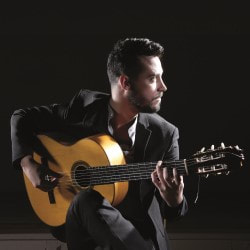 Flamenco Guitar Concert featuring Daniel Martinez at Yotel Queen Street is one of the hidden gems of Edinburgh Festival Fringe 2022, and if you have any interest in Flamenco music, or just watching and listening to a highly skilled guitarist bringing music to life on-stage, then this is a show not to miss.
This show is actually one of three different ones (1PM, 3PM and 7PM) in which Daniel Martinez and friends explore some of the many different aspects that go to make up what we have all come to recognise as Flamenco music.  Yesterday I was reviewing the 1PM show, Flamenco Lunch, which introduced us to Gabriela Pouso and the magic of Flamenco dance, Daniel on guitar, and the at times symbiotic relationship between the world of music and dance.  This show is in many ways an extension of that show and of that review too.

Today, we not only got the opportunity to again watch and listen to Daniel Martinez playing guitar, but were also introduced to two other vital elements in Flamenco music – songs and percussion. Providing the vocals this afternoon was, Imma Montero, and on percussion and rhythm guitar Danielo Olivera. Again, as with a dancer, the relationship between singer (often accompanying guitar with rhythmic clapping), percussion, and guitar is not fixed and one constantly flows in and out of the other as the roles of lead and accompaniment switch continually, often it seems at the whims of the performers, a bit like a musical wind gently blowing on-stage.

As per yesterday’s show, Daniel Martinez introduced us, in a very relaxed fashion, to some of the different styles of Spanish Flamenco, and also via music from some  of his own musical heroes, musical flavours of Latin America. Some of the guitarists that have influenced (and still continue to influence) the music and the guitar playing of Daniel Martinez are widely known and include, amongst others, Paco Serrano, Vicente Amigo, and Paco de Lucia.

Flamenco guitar may, like classical guitar, have very rigid structures and set pieces that simply must be played as written down, but it is also a style where the ability to improvise around a musical theme at any given performance is essential, and it is no surprise that this skill has allowed some of great Flamenco guitarists to cross over into the world of Jazz, and I have to admit that this is how I first got to know the name and guitar skills of Paco de Lucia.

You cannot write a review of Daniel Martinez and a guitar concert without paying some attention, without getting too technical, to his incredibly disciplined guitar technique. Here is someone who has spent many years studying, and will tell you that he is still studying and learning; that process seems never to end in Flamenco. At first glance, there seems to be a finger-style technique like many other guitar styles, but watch and look a little closer and there are so many different styles and techniques being performed and often at the same time in many different pieces of music.  Many of these techniques are unique to Flamenco music and incredibly technical and demanding to play, and Daniel Martinez makes it all look so effortless.

What really made this show for me though was not just listening to Daniel play his own compositions and music by some of his own Flamenco heroes, it was watching the obvious pleasure that he was getting from playing all of this music, the love that he so obviously has for not only Flamenco music, but its history in all of its many different forms. Perhaps the most important aspect of any show by Daniel Martinez is not any one performance, but the joy that he takes in sharing Flamenco in all its variant forms with his audiences.