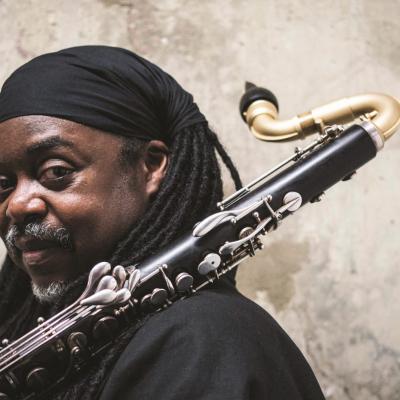 Courtney Pine presents Spirituality at the Queen’s Hall Edinburgh tonight was one of a series of tour dates to promote the new album of the same name by Courtney Pine and Zoe Rahman.  This new album featuring mostly classic standards with some new songs is a follow up to their 2015 collaboration Song (The Ballad Book).

As before, the combination of these two gifted musicians, Courtney Pine (bass clarinet) and Zoe Rahman (piano) has produced something just that little bit special, and the pleasure that both were getting on stage not only from the music itself, but from playing together on-stage was obvious for everyone to see and hear  The addition of a string quartet (cello, viola, plus two violins) added extra depth, layers and colour to the music and the arrangements of many of the songs performed this evening.

Courtney Pine introduced himself as someone who loves Jazz, and while that statement is obvious and his impressive career as a jazz musician to date proves this beyond any doubt, this tour (and album) simply underlines what many of us already know; Courtney Pine is not just a jazz musician, he is a gifted musician with a wide range of musical influences and abilities.  I have always viewed music as endlessly interweaving threads that come from every genre and every culture, and in the hands of the right people (Courtney Pine and Zoe Rahman for example) something new and vibrant always seems to emerge.

Whether it be an extended arrangement of the Michel Legrand classic “Windmills of My Mind” or a pretty straight cover of the doo-wop standard “Blue Moon”, one thing bound everything together in this set-list – that wonderful warm and expressive sound that Courtney Pine can always be counted on to get when playing, and Zoe Rahman’s skills on piano both as a soloist and accompanist.

What is the “Spirituality” of this album then? Well, at its most literal, it is a song with many influences, but it is more than that.  Spirituality is a feeling, a belief if you want, and that is something that each of us probably interprets in a different manner.  For Courtney Pine, a large part of that “Spirituality” is music and how our inner self can be enriched and influenced by it in so many ways.

This album is obviously a personal journey for Courtney Pine and the new song “Your Majesty” has, as we found out, a very special place in his memories. Other songs are often simply very special songs/music that Courtney wants to share with us all.