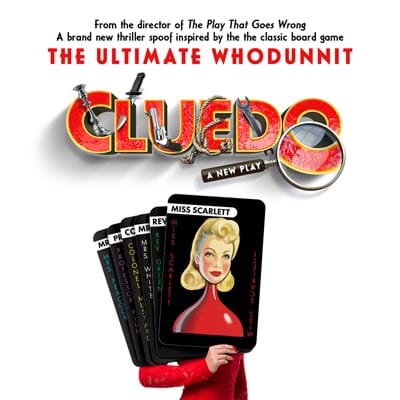 Cluedo is at the King’s Theatre Edinburgh this week (Tue 10 to Sat 14 May) and this play is, as you have probably guessed from the name, based on the now classic British murder mystery board game of the same name. There is a strong chance that many of us in the audience tonight will probably have played Cluedo in one of its many variants over the years.

As with the many outcomes possible in the game itself, this show is itself a variant of many things. Everything of course draws its source material from the original game created by Anthony Pratt and first manufactured by Waddingtons in 1949 (earlier production delayed by the War). The other main source material, and very much the template for this production, comes from the 1985 film “Clue” starring Tim Curry, and the play that followed on from it (the game was re-titled “Clue” in the US and Canada).   In this new play, director Mark Bell has wisely for British audiences made this a very British play by returning us to the post war 1940s as the time period, returned us to the classic board game characters and their murder weapons and a very British humour which is delivered by a very clever script full of murderously sharp one-liners by writer Sandy Rustin. The original screenplay is by Jonathan Lynn

As per the game, take six people, Miss Scarlett (Michelle Collins), Professor Plum (Daniel Casey), Colonel Mustard (Wesley Griffith), Mrs White (Etisyai Philip), Mrs Peacock (Judith Amsenga) and Reverend Green (Tom Babbage) who have all been invited at the same time to a mysterious mansion; add in a maid (Yvette – Laura Kirman), a butler (Wadsworth - Jean-Luke Worrell), a cook and a mystery man, some unexpected visitors, and the game begins to give up its clues as our story unfolds.  Of course, no one is as they appear to be and everyone has a motive for the murder of someone else in the house.

This is overall a cast with a lot of stage, film and television experience and that shows everywhere in this production. Michelle Collins is on great from as Miss Scarlett and adding lots of nice little subtle performance touches to her very distinctive scarlet lady with an equally scarlet dress and past.   Wesley Griffith is a wonderful Colonel Mustard who plays this not too sharp-witted military genius with style and brings Sandy Rustin’s at times very subtle script to life. Everyone else on stage has equally got their own Cluedo card personas pretty much perfect.

For some reason, butlers so often get the best lines in any story, and here this is true over and over with Wadsworth, and despite having a lot less experience on stage than many of those around him in this production, Jean-Luke Worrell is not only superb here, but he is the one (as per a great script for the part) person who not only weaves all of our characters together but keeps this story moving along at a fast pace to an almost inevitable conclusion.  Along the way we have many an Agatha Christie style murder – brutal, but perfectly clean with not a drop of blood spilt on the floor, the walls, or anyone else around them.

This “Cluedo” is a very sharp comedy murder mystery, very much a spoof of the genre, but at the same time firmly enough rooted in its story line to be taken seriously in its own right. There are so many elements here too of classic British theatre comedy farce, and all of it is so carefully timed to make it all look so natural and accidental.

Taking a sprawling mansion and the many corridors and rooms that our “Cluedo” suspects have to walk along and visit is of course no problem for a film, but for a stage show, a big problem, and that sense of moving around the house and into the many rooms required to solve this mystery is achieved by an ingenious and inventive stage set of opening rooms by designer David Farley. Costume supervision by Kate Lyons adds to our period setting, and the skills of lighting design (Warren Letton) and sound design (Jon Fiber) combine to bring the nostalgia of those old Cluedo games to life on stage.