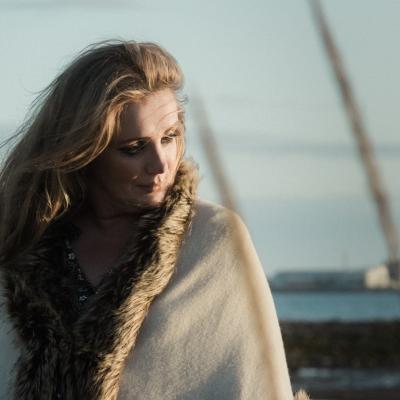 Christine Bovill was at the Queen’s Hall Edinburgh with a selection of songs that took us from the very first few songs that she ever wrote to new projects in 2022 and beyond.

Many people in the audience tonight will know Christine Bovill over the years from her highly successful Fringe Shows which have focused on the music of Edith Piaf, Chansons Francaises and songs from the 1920s Prohibition Era.

Tonight, of course, had some of these songs in the set list, and although these were all great shows, they did obscure the fact that Christine Bovill is more than an interpreter of other people’s songs, she is also a very talented songwriter in her own right.  With songs from the “Derby Street” (2011) and “The Sentence That I Serve” (2016) albums plus music from other projects, we all got a chance this evening to hear just how diverse Christine’s talents as a songwriter and performance artist really are.

At first, Christine Bovill standing on stage, guitar in hand, was for me a bit of a re-adjustment moment as my main image of her is from her classic Fringe shows, but this was an opportunity to see past that carefully constructed “show” image and discover some interesting songs and lyrics from the two already mentioned albums – “Lighthouse Keeper”, “Coming Home”, “Only Several Streets Away” and “Shadows”.  In all of these songs you can clearly see Christine’s love of “Chansons Francaises” as these are, like their French counterparts, little stories, little moments of people’s lives.

By her own admission, Christine Bovill is not a writer who directly reflects her life into her songs when writing them, but Beth Hart is such a writer and it was interesting to hear this cover version of “St. Teresa”.

There were some obviously personal choices of songs and songwriters in this set list, including Leonard Cohen, but the evening would not be complete without Christine giving us all her always powerful and interpretive take on Edith Piaf’s arguably two most famous songs – “La Vie en Rose” and “Je Ne Regrette Rien”. Both as always got much deserved audience applause.

There were a few clues this evening to other work, the still in the planning stages new show “Piaf to Pop” and a stage role as Kiki de Montparnasse for “A Play, a Pie and A Pint” theatre which starts next week.

This whole evening of music was also something a little bit special for Christine and many people in the audience as it was presented by The Queen's Hall, supported by Sam Breadon in memory of his late wife Renate.