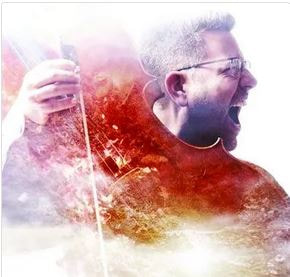 Cello on Fire by Peter Hudler makes a welcome return to The Edinburgh Festival Fringe and is at theSpaceTriplex with a completely new programme of music that will make you re-think just what a cello is capable of sounding like as a musical instrument. Here in this new show, Peter Hudler gives us a taste of musical styles from around the world as the sounds of traditional music from different cultures blend into the soundscapes of classical jazz and avant-garde, with the music often requiring very different and often unconventional approaches to how Peter plays his “Cello on Fire”.

For many years now, Viennese cellist Peter Hudler has established a well-earned reputation for his work in the classical music world and it is surprisingly rare to see classical musicians of Peter’s calibre step outside of this at times very structured performance world and venture into very different musical worlds of a show like this one. Having said this though, what is underpinning everything here is the disciplined talent of Peter as a musician and the fact that he is so willing to experiment with his music and his approach to playing his cello.

I want this show to be as much of a surprise to you as it was to me, so I don’t want to give too much of its content away. The show opens with traditional Celtic music, both Scottish and Irish, and as the show progresses we get taken into almost surreal Australian Aboriginal “dreamscapes” and the very distinctive sounds of Sicilian mourning music.  The sounds of Argentinean Tango also blend in with Tibetan and Chinese musical influences. We stop for a moment or two to visit one of my favourite composers of all time J S Bach (a man who helped create the foundations of so much of what we now recognise as popular music today), and my favourite from this show, and to me the one piece worth the ticket price alone, Peter performing “One Day My Prince Will Come” from the classic Disney “Snow White” film.  Over the years, this song has been re-invented so many times by so many different people and it has long been a jazz standard, so watching Peter turn his cello into a jazz guitar for this song will, I know, be a surprise for many people.

What makes all of this music possible is two things. The first of course is the cello itself, a very versatile instrument that has one of the widest ranges of any stringed instrument.  Having said this though, hearing some of this music played on a cello when you might normally associate it with, say, a violin can make it sound so very different, but in a good and often unexpected way as there is a deep soulful resonance at times to some of this music that only a cello seems to be able to give.  The second thing of course is Peter Hudler himself, and the many years of practice that it takes to become as proficient and versatile as this to play any musical instrument to this level.