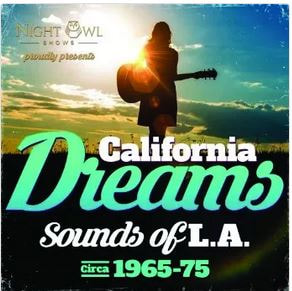 California Dream at theSpace @ Surgeons’ Hall (Fleming Theatre) is a light but fast moving homage by Night Owl Productions to the now legendary music that came out of the Laurel Canyon area from 1965 to 1975.  Somehow, a free spirited collection of artists from all genres and ordinary people were drawn to this area in the hope of finding something that life was not offering them elsewhere and many seem to have found it there for a brief time until, like so many things in life, this collective slowly dissipated over the years, a bit like mist in the morning and now, some of us wonder if it was ever there at all.

Well, this show proves that for a brief moment in time the magic of Laurel Canyon and its very special California Dream was not only there, but has left a legacy of music that epitomised the times. Making this music were young then, but now legendary, writers, songwriters, bands and performance artists including, Crosby, Stills and Nash, James Taylor, The Mamas & The Papas, Joni Mitchell, Neil Young and many more well known names.

Somehow for this show, Dan Clews and Reine Beau Anderson Dudley not only have to select a set-list from a vast reservoir of classic songs, but also they somehow have to manage to re-create the sounds and the feel of the songs that they choose live on stage.

Opening this show with The Byrds’ version of Bob Dylan’s “Mr Tambourine Man”, Reine and Dan both set the musical scene for this show but also put this full capacity venue audience at ease. With Reine on vocals and Dan on guitar/vocals, some of these songs were pretty close to their original arrangements whilst others required a bit more work to make them fit this stripped back format, and overall it all worked well as songs like “California Dreamin’”, “Light My Fire”, “Our House”, “The Circle Game” and others kept this audience is a very laid back and mellow mood that so perfectly fitted the times that these songs came from.

Any show like this is obviously going to be a bit of a compromise and Reine Beau did a fine job overall with these songs as the original artists had such different vocal ranges and presentation styles. Dan has not only that laid back approach to his vocals that are needed on many of these songs, but also the technical abilities on guitar to change playing styles and techniques as needed to get the best out of a song.

Like all Night Owl Productions, the format is the same one for this show, provide a little bit of background to the history of the artists and their songs, cover them well with competent singers and musicians, but never step over into that copy-cat tribute band territory.  Here it is the words and the music of the songs that matter most, as it should always do.