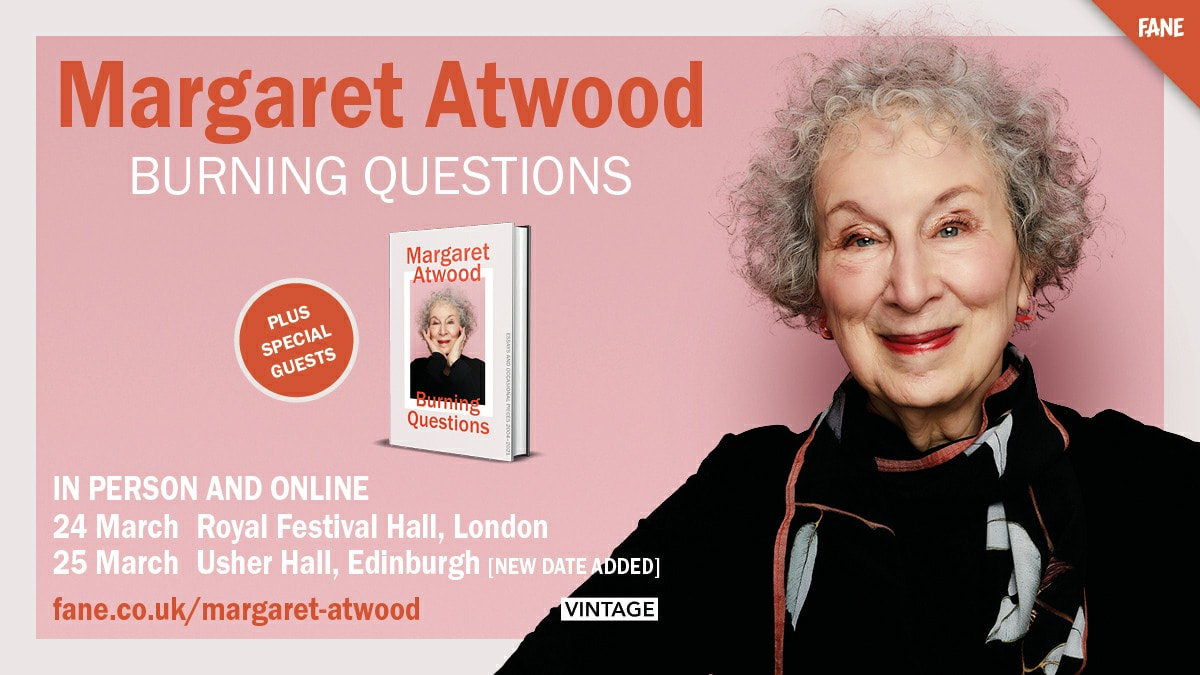 Margaret Atwood was at The Usher Hall Edinburgh tonight as part of her promotional tour for her new book Burning Questions: Essays 2004?2021 which was published this month by Vintage (Chatto & Windus imprint) in the UK.  As the title suggests, this is a collection of essays and other pieces (the third collection). There are 50 pieces in this collection (selected from many more essays that could have been included) and they give an intriguing insight into the many aspects of life that both intrigue and sometimes concern Margaret Atwood both as a writer and an individual.

This promotional tour is organised by FANE, who have an impressive list of authors working with them, and the format is a fairly simple one – the first half of the show is to discuss the new book (obviously) and the second half takes questions from the audience.  Tonight, the host/interviewer for this show was writer, journalist and comedienne Vivien Groskop.

If you are reading this review, the chances are that you know very well who Margaret Atwood is, but in case you are wondering, Margaret Atwood can justifiably claim to be one of the most critically and commercially acclaimed living authors of the 20th/21st centuries.  Any quick Google search will reveal the expansive extent of her novels and other writings since the early 1960s, and many people who have never even read any of her works will still be familiar with the name of Margaret Atwood as the writer of The Handmaid’s Tale (1985) via the film adaptation and the television show (now on its 5th series).

I should make it clear that this review is neither a direct review of the new book (there are many out there already), nor the career of Margaret Atwood, but of this actual  event, and I have to admit that the chance to see and hear Margaret Atwood in person was my reason for going to The Usher Hall tonight as the opportunity to listen to someone who has done so much across so many diverse fields of interest in a long life was an opportunity not to be missed, and maybe, just maybe, there would be glimpses into the heart and soul of Margaret Atwood not just as an author but as a human being.

Some people say that everyone has their own story to tell, and I believe that to be true.  I also believe that the more opportunities you get to watch the autumn leaves fall in your life, the more interesting that story can become, and Margaret Atwood proved this for me many times during this show. It was enlightening to hear someone say that growing older is a privilege and not something to be feared, and that change in life and in yourself is an inevitable part of growing older too.

Throughout this evening, Vivien Groskop had the job of not only asking the questions, but doing it in a manner that put both Margaret Atwood and the audience at ease whilst still keeping everything moving along at a pace that never dwelt too long on any one subject and kept everything to an obviously strict time-schedule, and that job was overall well done. Within this light and relaxed atmosphere we were given, amongst other things, a little bit of background into the childhood of Margaret Atwood and her early career as a writer. In the latter, Margaret’s involvement, along with some of her fellow writers, in the early 1960s in self-publishing, by whatever means possible, their own works in very small numbers due to the lack of any other publishing avenues at the time in Canada I found illuminating, and these early self-publishing attempts helped to lay the foundations of what was to become modern Canadian book publishing.

Although Vivien Groskop kept the pace of this event moving on, there are times when I wish we could all have spent a little more time with Margaret Atwood the political and environmental activist as I share her concerns on climate change and in particular “ocean-death”.  Time constraints also only allowed us to briefly visit one of Margaret Atwood’s current interests, her involvement with the online Practical Utopias project. Also from the question half of our show, Margaret Atwood’s advice to any new writers was – “not to be afraid of the page”.

As well as obviously promoting the new book, this evening was an insight into Margaret Atwood, the woman behind the words, a woman who is sharp witted, funny, genuinely humble despite all of her great successes in life, and perhaps most important of all, someone who is still curious about everything and everyone around her in this world.  Perhaps in the end, this curiosity about everything and the insight to see clearly the small details of people and life that so many of us simply miss or take for granted, is what makes a great writer.