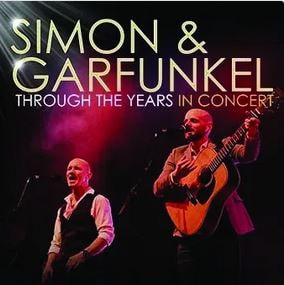 Simon & Garfunkel Through the Years makes an ever popular return to the Edinburgh Festival Fringe at theSpace @ Symposium Hall and, as usual, this show is bringing in fans old and new to this unique performance and tribute to the songs of Simon & Garfunkel.

The show is by Bookends (aka Pete Richards & Dan Haynes) and if you are looking for a couple of people dressed up to look like your musical icons and trying to imitate their sounds then you have the wrong show as Pete and Dan have quite rightly always refused to perform like that.  This duo are not Simon & Garfunkel, they know that and we know that, but over the years I think as many people now come to their shows to hear them perform as do those who want to just hear some of these iconic songs.

If you want a show that pays tribute in music and words, a show by two talented performers who genuinely love this music, but do it in their own way whilst staying true to the original songs and somehow capturing a little bit of their original magic, then this show is for you.

Dan and Pete have performed their tribute to the music of Simon & Garfunkel across the UK and Europe and as far as the USA and Australia, and the reception is always the same – appreciative applause at how well they not only sing these songs, but somehow manage to take many people in the audience back in time to that wonder of hearing them for the first time and along the way re-capturing so many happy memories for people.

There are only so many songs that you can fit into a one hour or so Fringe format, so that always means choosing carefully what songs are on the set list.  Some songs of course have to be there, but there are always surprises as the show changes every year and the set list itself of any show is often open to change.

This year is a new show and a return to basics by the duo, there are no gimmicks here, Dan on guitar/vocals and Pete on vocals too and together the two manage to get those close harmonies that we all remember these songs for pretty much perfect.  These are the close harmonies that are only possible when two people have worked together for a long time.

What Dan and Pete perform on stage here is not the often over-produced sounds of the records, but the often stripped down arrangements of songs that Simon & Garfunkel played live (often from 1960s/1970s performances), and this stripped down format allows us all to get at the compositional beauty of these wonderful songs.

Opening their set with “Mrs Robinson” then moving right into “A Hazy Shade of Winter”, this duo had their audience captivated early and it stayed that way all through the show as song followed song (some better known than others) – America, Bleeker Street, Homeward Bound to name only a few, and of course a few that I don’t even need to mention because you all know and expect them to be there.  There are of course so many Simon & Garfunkel songs and just not enough room to put everyone’s favourite into the show, but this year Dan & Pete are rotating their own favourite set lists so if you do not hear that song today, come back tomorrow, it might just be there.

Between the two of them, Dan and Pete capture the true essence of these songs as they were meant to be performed with very tight close harmonies and attention to detail of the originals, but always in there is their own self, their own enjoyment at performing these songs live to an audience.

For me, Paul Simon is one of the last of his generation of great songwriters, with an ability to write words to music that few people could match at the time (or have done since), and he has created many immortal songs along the way. What is sometimes forgotten in all of this is that Paul Simon is also a very gifted guitarist and many of these songs are actually very complex to play properly. Dan Haynes is also a very gifted guitarist, and his attention to finger-style guitar technique on these songs is always impressive.

Somehow this evening this show just captured that very mellow, very laid back mood and feel that I so often associate with these songs and the times of their creation. If the applause at the end of this show was anything to judge things by, I was not the only person in the audience feeling like that.