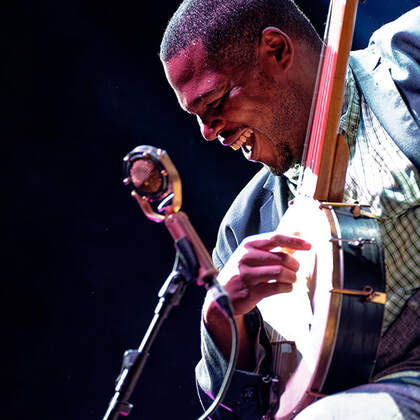 Blind Boy Paxton performed at George Square Spiegeltent tonight, one of his shows at The Edinburgh Jazz & Blues Festival 2022, and I have to admit that I find both the man and his music a little bit of an enigma as I am not sure exactly where talent and marketing image meet one another.

Maybe part of the answer to my puzzle lies in just who Jerron (pronounced Jer-Ron) “Blind Boy” Paxton, an American musician from Los Angeles born in 1989, really is and what is the source of his music. I only have a small amount of information to go on here and much of that was supplied by Jerron himself in this show as he gave us some insight into his family roots and his grandparents’ move from Louisiana to California in 1956. There is also the fact that Jerron has been registered blind since he was 16 years old due to a hereditary condition that has been causing sight deterioration ever since.

One thing that seems clear is that music, in many forms, has always been around Jerron as he listned to the music of the elders in his family and, with that music, also their stories, and he swiftly came to realise that The Blues, like many traditional music forms (including Scottish/Celtic) are actually oral history and that they contain many stories that many people would like to white-wash, or even eradicate from history. These are often the stories of people on the lower economic levels of society who find themselves subject to oppression and exploitation for many reasons, and in The Blues, the colour of your skin is an inescapable factor in the history that these songs tell.  In this music, in these stories, Jerron obviously felt not only an affinity with his own family’s history, but many other people’s too, and quite rightly felt that these songs, these stories, need to be told to remind people of their heritage and their story, and this is where the persona of Blind Boy Paxton for me comes into being.

Blind Boy Paxton is without doubt a skilled musician and his finger-style work on guitar and banjo is impressive, but more than that, many specialists in the history of Blues music consider that his style, his homage to the music of the 1920 to 1940s period is not only as authentic as you are going to get, but that watching and listening to him perform live is like watching history coming to life as he effortlessly bridges a gap of some 100 years on stage.  Even his name, “Blind Boy” is a homage to some of the names of Blues Music history such as Arthur Blake aka Blind Blake, while also evoking the sounds of legendary bluesmen like Leadbelly and Robert Johnson

Stepping out on stage tonight in blue dungarees and a white shirt, Blind Boy Paxton looked as if he had just taken some time out from his hard manual labouring job and played classic sounds ranging from “Railroad Bill” to the gospel “How I Got Over” as well as some of his own compositions.  Jerron Paxton is not only an obvious lover of the music that he plays, but a wealth of historical knowledge on these songs too, and that was shared in an easy and informative matter throughout the show. Some people might have been surprised for example to find out that the banjo pre-dates the guitar as the definitive stringed instrument of “The Blues”.  Other instruments also feature his musical versatility, fiddle and piano amongst them too, but the ability to traverse that right of passage that anyone playing blues harmonica has to cover, the ability to recreate the sounds of the railroads (which were such a definitive part of the landscape of many people of the time) was easily passed.

Blind Boy Paxton is obviously in part a stage and recording persona of Jerron Paxton and I have no problems with that, image and music have always gone together.  We would expect someone singing classic Frank Sinatra songs to be dressed appropriately and probably would not accept someone dressed in a baseball cap, track suit and trainers to be singing these songs, but one of the last songs in this set, “The Very Thought of You”, played on piano shows that there is much more to the music of Jerron Paxton than his “Blind Boy” persona, and I would really like to see more of Jerron himself for one show at least as the problem with “image” is that is can so easily become “stereotype”.

At the end of the day though, Blind Boy Paxton is as close as any of us will probably get to seeing live many of these great names from the formative years of 20th century blues, and just as importantly as the music, he puts back into the music an infectious and gentle humour that we all too often forget is as much a part of blues music as the many tales of woe. Humour was an essential mechanism for coping with the many troubles of daily life for many people and Blind Boy Paxton reminds us all of that too.