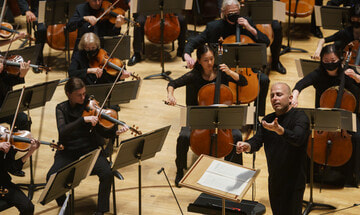 Beethoven’s Fifth Symphony by The Philadelphia Orchestra at The Usher Hall Edinburgh, part of the Edinburgh International Festival performance programme for 2022 will, if the applause at the end of the evening is anything to judge, by be remembered as a huge success.  There will of course still be many people who are disappointed that this concert was a change to the planned performance of Beethoven’s Ninth Symphony which had to be changed due to conflicting protocols for Covid 19 and in particular the use of face-masks for members of the chorus. Still it was good to hear tonight one of the most recognisable works of music of any genre being performed by a musical ensemble with the reputation of The Philadelphia Orchestra as they take up their EIF 2022 residency across five concerts.

What makes Beethoven’s Fifth so popular, so recognisable? Well the answer to that for many people is the opening four unison notes and these are quickly followed by four more. This musical theme of course repeats itself throughout the first movement.  There are many possible explanations for these opening notes (but none it seems directly from Beethoven himself). The one that I like best, even though it is unlikely to be the true one, was given by Beethoven's secretary and biographer, Anton Schindler who claimed that these notes represent fate knocking at the door. Sometimes myth is better than truth and this one certainly sets the mood for everything that follows in this work.

Conducting this work (and everything else this evening) was Yannick Nézet-Séguin who has been The Philadelphia Orchestra’s Music Director for a decade, and this was a powerful and moving performance that brought out every tone, colour, and emotion of this classic work, making every instrument in the orchestra come alive to create a very unique “fifth”.

This work is a never-ending shift from darkness to lightness and back again as its theme of heroic struggle against the fates expands over the four movements of this symphony. Here though, Beethoven is not just describing some heroic fantasy story of the golden age, but also the daily struggles that everyone has in their own life. Sometimes, I wonder how much of this heroic struggle, this battle with the fates which constantly moved from victory to defeat and back to victory again, was in part Beethoven’s response to his own battle with an ever-increasing loss of his hearing.  Whatever the true story, or stories, the full depth of this music and the way in which Beethoven worked with every musical tool at a composer’s disposal was evident and the very different movements (the second always for some reason being my favourite) were explored to their fullest by Yannick Nézet-Séguin and The Philadelphia Orchestra.

Keeping in this mood of darkness and light was Rachmaninov's almost monochrome extremes Isle of the Dead. Inspired by a black-and-white reproduction of an 1880 painting by Swiss Symbolist artist Arnold Böcklin, Rachmaninov was later to be disappointed when he eventually saw the original work in full colour, commenting that this work would not have inspired him to write Isle of the Dead.

Like the original painting (well print in this case), the scene suggests the mythological River Styx and the oarsman Charon rowing (some say transitioning) a recently deceased soul to the afterlife, and this is what Rachmaninov is recreating in music. Many people are of the opinion that his use of 5/8 time depicts what may be the rowing of the oarsman or the movement of the water. Whatever the reasons that Rachmaninov had when composing this work, the end result of his music in the right hands, like tonight, is the ability to pull listeners into this world of myth and allow us to explore the possibilities of this twilight transitional world with him.