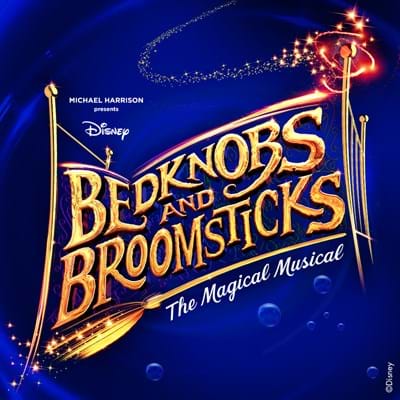 Bedknobs and Broomsticks the Magical Musical is at The Festival Theatre Edinburgh (Wed 19 to Sun 23 January) and this slightly re-scheduled date of the show’s first UK and Ireland tour has been more than worth the wait as this show is simply destined to be a musical theatre classic in the years to come.

Coming from Disney, it was always a certainty that production values were going to be very high and that the budget required to bring the 1940s books of author Mary Norton to life on stage was going to be available and spent. The creators of the show of course also had to find a way to retain so much of the “magic” of the 1971 film that has over the years become loved (as have the books) by so many people. Somehow, a combination of an inspired set design/on stage illusions (Jamie Harrison), impressive costume design (Gabriella Slade), creative lighting and sound (Simon Wilkinson and Gareth Fry) and of course some imaginative choreography (Neil Bettles) to some classic music and songs, book, film and stage have seamlessly merged into a “magical” show for audiences to sit back and enjoy.

So much of the feel of the magic and fantasy world of this show is of course down to the original music for the film by the hugely creative and successful Sherman Brothers – two Americans who somehow had such a feel for “British” themed works that many people thought that they too had to be British.  Despite many differences, there has always been in the minds of some people a “Mary Poppins” feel to Bedknobs and Broomsticks and, on stage, this is maybe a little more apparent at times as the Sherman Brothers also wrote the music for Mary Poppins.  This show also has new music and lyrics by Neil Bartram and they are seamlessly fitting into the original Sherman Brothers classics whilst enhancing the story line of this new production (book by Brian Hill). The addition of a live orchestra performing the music to this show also added so much to the theatrical experience tonight.

This show of course ultimately rests upon the shoulders of one person, the witch Eglantine Price and here this role seems to have been tailor made for Dianne Pilkington who seems to get both the eccentricity and at times naivety of her character just right. Whether flying her broomstick, taking a magical ride on a brass bed, song and dance numbers, or just skilfully and fluently continuing our narrative, Dianne Pilkington has more than made her mark as Eglantine Price and has set a very high bench-mark for any person playing this role in the future to meet.

Keeping so much of our magical story alive are of course our three Rawlings children, who all give us good performances – Charlie (Conor O’ Hara), Carrie and Paul with the later two being performed tonight by  Izabella Bucknell and Aidan Oti. Supporting Eglantine Price in magic and a possible romance, we have Emelius Browne, and Charles Brunton has that light touch that is just needed for this character.
For many of us who have seen the film over the years, what we remember most is the animation, and the problem of how to re-create that on stage is solved by some very impressive puppets and performances by their puppeteers, and as with the changing set designs, everything here is done with such a natural flow that the story is never allowed to be held up at any point in the show.

Not everything in this show is lightness and sunshine, and the choice to set our story during the 1940s time period that the books were written and opening our show amidst an air-raid gives us a darkness that plays out throughout this narrative to always contrast with the far lighter elements of the story.

For any production like this, getting that balance of telling a children’s story whilst keeping both children and adults engaged and entertained is a difficult balancing act, but here a magical fantasy world for children (and adults) has been created at the same time as telling a more mature story full of emotion and surprises; this show is definitely not just for children.

Talking of surprises, the ending scenes of this story have some real shocks to our story line (or do they?), so if you can avoid it, do not leave the theatre early, see this show right through to the very last words.