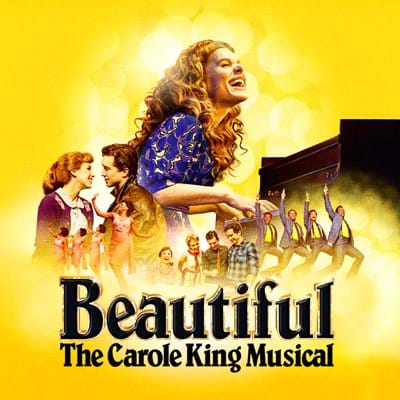 Beautiful The Carole King Musical is at The Festival Theatre Edinburgh this week (Tue 05 Apr to Sat 09 Apr), and if you want to celebrate a small fraction of the rich musical legacy that Carole King has given to the world, then this show is as good a place as any to start.

For me, Carole King is simply one of the great songwriters of her generation, and this show opens with Carole (Molly-Grace Cutler) re-building her world and at an artistic high-point in 1971 performing at Carnegie Hall, the year that her now iconic Tapestry album was also released. The title of this show, Beautiful, is a song on this album along with many other wonderful songs that have over the years become popular music classics and recorded many times by other artists.

This show is in the classic start at a point in time (1971) and go back to the beginning of the story format, and we find an already hugely talented 16 year old Carole trying to sell her first major song (It Might as Well Rain Until September). In this story we very quickly meet the love of her life, and future songwriting partner, Gerry Goffin (Tom Milner). In a short period of stage time, the great Goffin/King songwriting partnership is formed and their first major song for the Shirelles –“Will You Love Me Tomorrow” (aka Will You Still Love Me Tomorrow) is a number 1 USA Billboard hit.

Beautiful is of course about the music of Carole King, but it is also about her family and friends and how both interweave like threads of a tapestry through her life to make up a larger picture, and at the publishing house offices of “The Brill Building” the show also quickly introduces us to what was to become another great songwriting partnership – Cynthia Weil (Seren Sandham-Davies) and Barry Mann (Jos Slovick).

Classic songs, classic writers and some really interesting stories to be told; all the building blocks are in place for a classic stage musical.  What then has gone wrong with this new production of Beautiful as these building blocks are all too often not falling into place?  There is actually not one reason here, but many reasons, and some of them stem from the inherent problem that all of these “juke-box” musicals have, and that is that the cast are chosen primarily for their musical or vocal (often both) talents over often limited dramatic experience or abilities and all too often here this reduces really important and sensitive moments in this story to little more than just words on the script.

This really is a show in two halves, on many levels, and the first Act gives us some of the great songs that Goffin/King and Mann/Veil wrote for other artists, and it is in the portrayal of artists like The Shirelles, The Drifters and The Righteous Brothers that the problems are really apparent as some of the greatest songs of the time are reduced to little more than pub karaoke night.  There is no doubt in my mind that there is some serious young musical talent on stage tonight, but it seems that many are all too often simply out of their comfort or interest zones here.  There are times though when you do get glimpses of the talent that lies behind the characters in a different scenario, particularly with Tom Milner, Jos Slovick and of course Molly-Grace Cutler.

The second Act for me is what saves this show from theatrical and musical oblivion as, for some reason, many of our musical cast seemed to be far more into their own comfort zones and letting their own true talents shine through their sometimes restrictive character roles a little more.  We are now into the songs of Tapestry and it is here that Molly-Grace Cutler really starts to show us why she is in the lead role for this show and now classic songs like “I Feel the Earth Move”, “It’s Too Late”, “You’ve Got A Friend” and “Natural Woman” are given the musical delivery and respect that they deserve.

Despite some interesting performances as time went on in this show, particularly Garry Robson as music producer/publisher Donnie Kirshner, there is little that our cast can do to escape the all too obvious economy of the set design here, and the fact that it was all so obviously designed for a smaller stage than the Festival Theatre could not be missed.  Why some simple alterations to stop the views backstage that people sitting left and right in the theatre could see is a mystery to me.

This type of show is always going to be what it is; this is not, and never was designed to be, dramatic musical theatre, but some other insights to the music would have helped and there is no reference to the fact that “Will You Love Me Tomorrow” was actually banned on many radio stations due to the perceived immorality of its lyric, or even to James Taylor who is so closely woven into the fabric of this story.

One interesting fact that does come out of all of this is how Natural Woman nearly never made it onto the Tapestry album because the lyric was written by Gerry Goffin, and Carole King was not comfortable recording it after their split. It is intriguing to me that the words to this great song of female empowerment were written by a man.  Gerry Goffin had of course demonstrated his ability to write words for a song from a female perspective right at the very beginning with “Will You Love Me Tomorrow”.  Would our PC world even allow this to happen today?